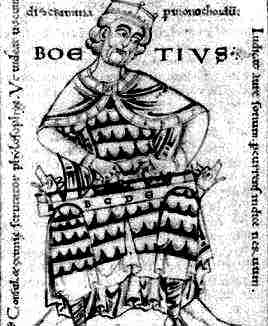 Anicius Manlius Severinus Boethius (born: circa 475–7 C.E., died: 526? C.E.) has long been recognized as one of the most important intermediaries between ancient philosophy and the Latin Middle Ages and, through his Consolation of Philosophy, as a talented literary writer, with a gift for making philosophical ideas dramatic and accessible to a wider public. He had previously translated Aristotle’s logical works into Latin, written commentaries on them as well as logical textbooks, and used his logical training to contribute to the theological discussions of the time. All these writings, which would be enormously influential in the Middle Ages, drew extensively on the thinking of Greek Neoplatonists such as Porphyry and Iamblichus. Recent work has also tried to identify and evaluate Boethius’s own contribution, as an independent thinker, though one working within a tradition which put little obvious weight on philosophical originality.