"This is how great intellectual breakthroughs usually happen in practice.  It is rarely the isolated genius having a eureka moment alone in the lab. Nor is it merely a question of building on precedent, of standing on the shoulders of giants, in Newton's famous phrase.  Great breakthroughs are closer to what happens in a floodplain: a dozen separate tributaries converge, and the rising waters lift the genius high enough that he or she can see around the conceptual obstructions of the age." - Steven Johnson, The Ghost Map. 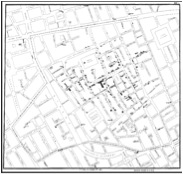 Excerpt from the book:

John snow began working on his first map of the Broad Street outbreak sometime in the early fall of 1854...Each death was represented by a thick black bar, which made the houses that had suffered significant deaths more vivid on the ap. and the detail on the map was reduced, with everything but the basic streeet layout and the icons representing the thirteen public water pumps that serve greater Soho eliminated. the visual impact of the map was striking...The Little Marlborough Street pump had a few black bars in its immediate vicinity but they were nothing compared with the concentration of death around the Broad Street pump., black bars lining the nearby street like solemn high-rises.  Without a permanent icon for the Broad Street pump, the other dot maps of the epidemic had presented an amorphous shape, like a cloud haning over western Soho. but when you emphasized the pumps in the image, the amp took on a new clarity.  Cholera wasn't lingering over the neighborhood in a diffuse form. it was radiating out from a single point.

...After presenting to the Epidemiological Society, Snow realized that his original map was still volnerable to a miasmatic (cholera transmitted by bad air-rl) interpretation.  Perhaps the concentration of deths around the Broad Street pump was meerely evidence that the pump was releasing noxious fumes into the air.  And so Snow realized he needed a wy to represent graphically the foot-traffic activity around the pump that he had so painstakingly reconstructed.  he needed to show lives, not just deaths; he needed to show the way the neighborhood was actually traversed by its residents," (Johnson 2006:194-195).

The Ghost Map by Steven Johnson from Book Videos on Vimeo.

Click on this link to get an interactive map to explore what John Snow created.