A:Crucified figure on a tall cross with a short base. The wrists are tied to the cross, feet held as if hanging in the air, bearded head with long hair in profile to left.  Letters in the free field, above the head of the figure: υιε. Inscription in eight lines to the left and right of the image: πατηριη|σουχριστε|σοαμνωα|μωαωια|[.]σηιουω||[.]αρταννα|[- -]υσιου|[- -]ι[- -] → Υἱέ, Πατήρ, Ἰησοῦ Χριστέ. 'Son, Father, Jesus Christ', voces (J. Spier)
B: Rest of an inscription in ten lines: ιωε|ευαευιι|[.]ιουισυε|[.]αδητοφν|θιεσσετσκηε||
[.]μαναυηλα|στραπστκμη|φμειθωαρ|μεμπε|[- - -] → voces including vocales, βαδητοφωθ, variant of σατραπερκμηφ. 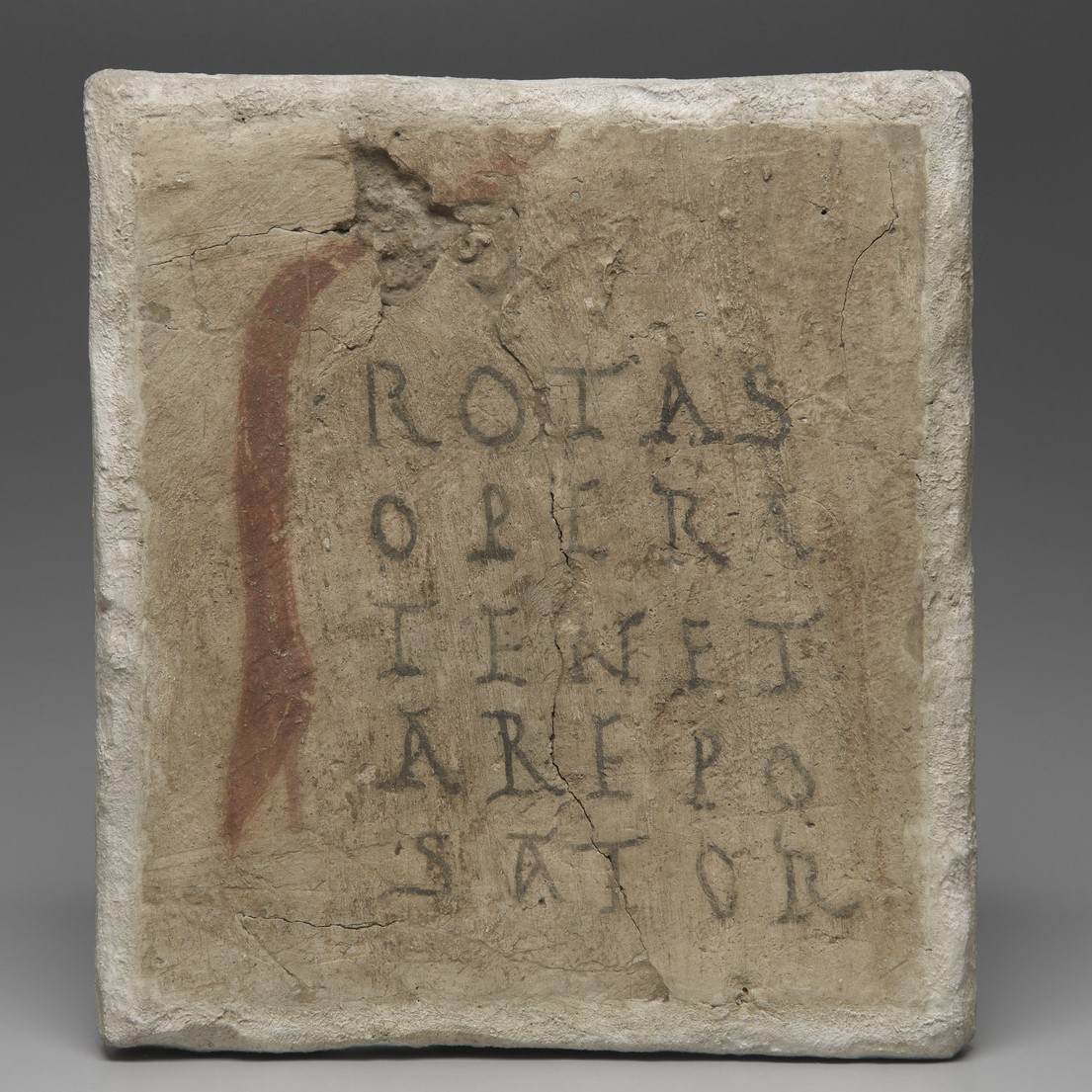 The Sator Square, ancestor of crosswords, is a famous word square in Latin. It is a word square containing a Latin palindrome featuring the words SATOR AREPO TENET OPERA ROTAS written in a square so that they may be read top-to-bottom, bottom-to-top, left-to-right, and right-to-left. Note that a word square is a special case of acrostic. It consists of a set of words, all having the same number of letters as the total number of words (the "order" of the square); when the words are written out in a square grid horizontally, the same set of words can be read vertically. So, the Sator square is a kind of crossword puzzle, rather than a mathematical magic square. The earliest known appearance of the Sator Square was found in the ruins of Herculaneum (an ancient Roman town) which was buried in the ash of Mt. Vesuvius in 79 AD. Therefore, its origins may well predate the Christian era. The Sator Square also forms a sentence, though its meaning is obscure. Possible translations of the phrase are 'The sower Arepo holds the wheels with effort' or 'The sower Arepo leads with his hand (work) the plough (wheels).' and 'The Great Sower holds in his hand all works; all works the Great Sower holds in his hand.' The word arepo is enigmatic, appearing nowhere else in Latin literature. Most of those who have studied the Sator Square agree that it is a proper name, either an adaptation of a non-Latin word or most likely a name invented specifically for this sentence. 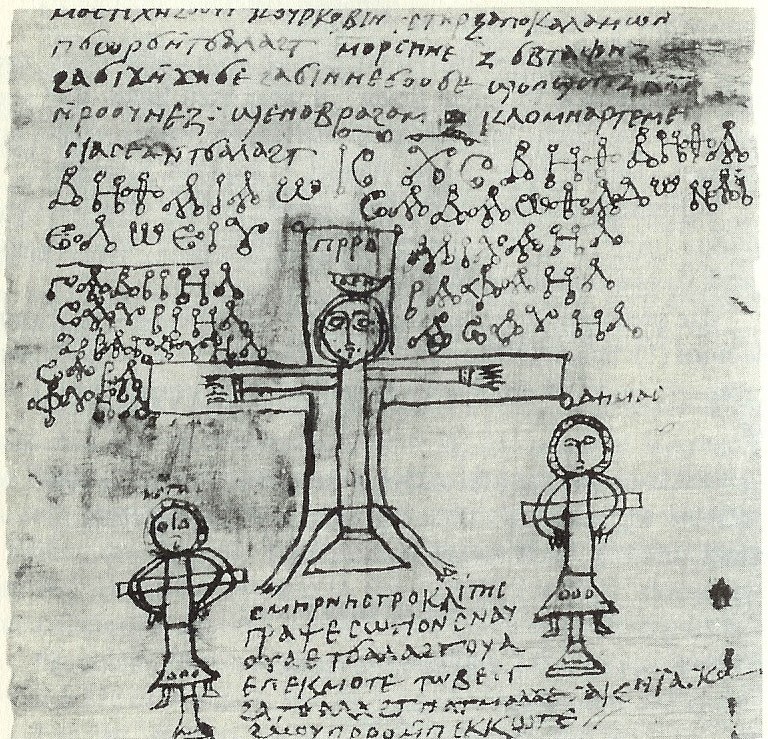 Spell to cast out every unclean spirit (London Oriental Manuscript 6796 [4]). Photo: Marvin Meyer and Richard Smith. Coptic magic papyrus of the 6th century with a sketch of the Crucifixion

The name ‘Jesus’ also appears as a means of magical self-identification. In this sixth-century exorcistic incantation entitled ‘spell to cast out every unclean spirit’ the magician uses the familiar ‘I am’ formula to identify himself with Jesus (‘I am Jesus Christ’). A crucifixion scene also accompanies the main text  and the spirit of Jesus is invoked through an elaborate ritual of adjurations and offerings during which the magician states:

‘I adjure you, father, by Orpha, that is your entire body, and Orphamiel, that is
the great finger of your right hand, that you send me Jesus Christ…
The incorporation of Jesus’ name into magical procedures indicates that Jesus was considered by many magicians in the first centuries, particularly those responsible for constructing these texts, to be a powerful magician and consequently a potent source of authority for their spells. In addition, the attempts to control Jesus’ spirit that appear in many of the later Christian magical texts suggest that he had fallen victim to the procedures with which he was charged during his lifetime; the manipulator had become the manipulated. Ultimately, if the accusations of magic made by the opponents of Jesus were proven to be unfounded and malicious lies and the techniques of magical practice in the Gospels were entirely fabricated by the Gospel authors or completely innocent methods of healing, then the indisputable fact remains that, like many other miracle-workers who flirted on the boundaries of magic, Jesus was considered by some during his lifetime to be a capable magician and he remained closely associated with magic following his death. For full text, see Meyer and Smith, Ancient Christian Magic, pp. 290 – 291.)