CLAS 3240: Magic in the Ancient World: Contact and Discuss

Brian Sowers received his MA (2006) and PhD (2008) in Classics at the University of Cincinnati. He also studied Hellenistic Judaism and ancient literary criticism at Hebrew Union College. Before joining the Classics Department at Brooklyn College in 2010, Brian taught ancient and European history at Northern Kentucky University and ancient religions at Washington and Lee University. Here at Brooklyn College, Brian teaches Greek and Latin at all undergraduate levels and on various topics, including Magic in the Ancient World; Gender and the Body in Ancient Religions; and Pagans, Christians, Jews. Among his many recognitions as a teacher-scholar, he received Brooklyn College's Excellence in Teaching Award in 2012. He currently serves as the director of the Roberta S. Matthews Center for Teaching at Brooklyn College.

Emily Fairey is the technical designer and editor of this site. She has a doctorate in Classics from CUNY Graduate Center (2006), and a masters in Library and Information Science from Pratt Institute (2011). She teaches Latin, Greek, and Classical Studies as well as creating websites, and language-learning modules. She is also a classically trained flutist and saxophonist and has played for 18 years in the Hungry March Band. For more information, see her website. 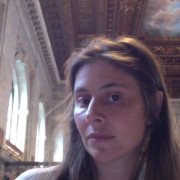