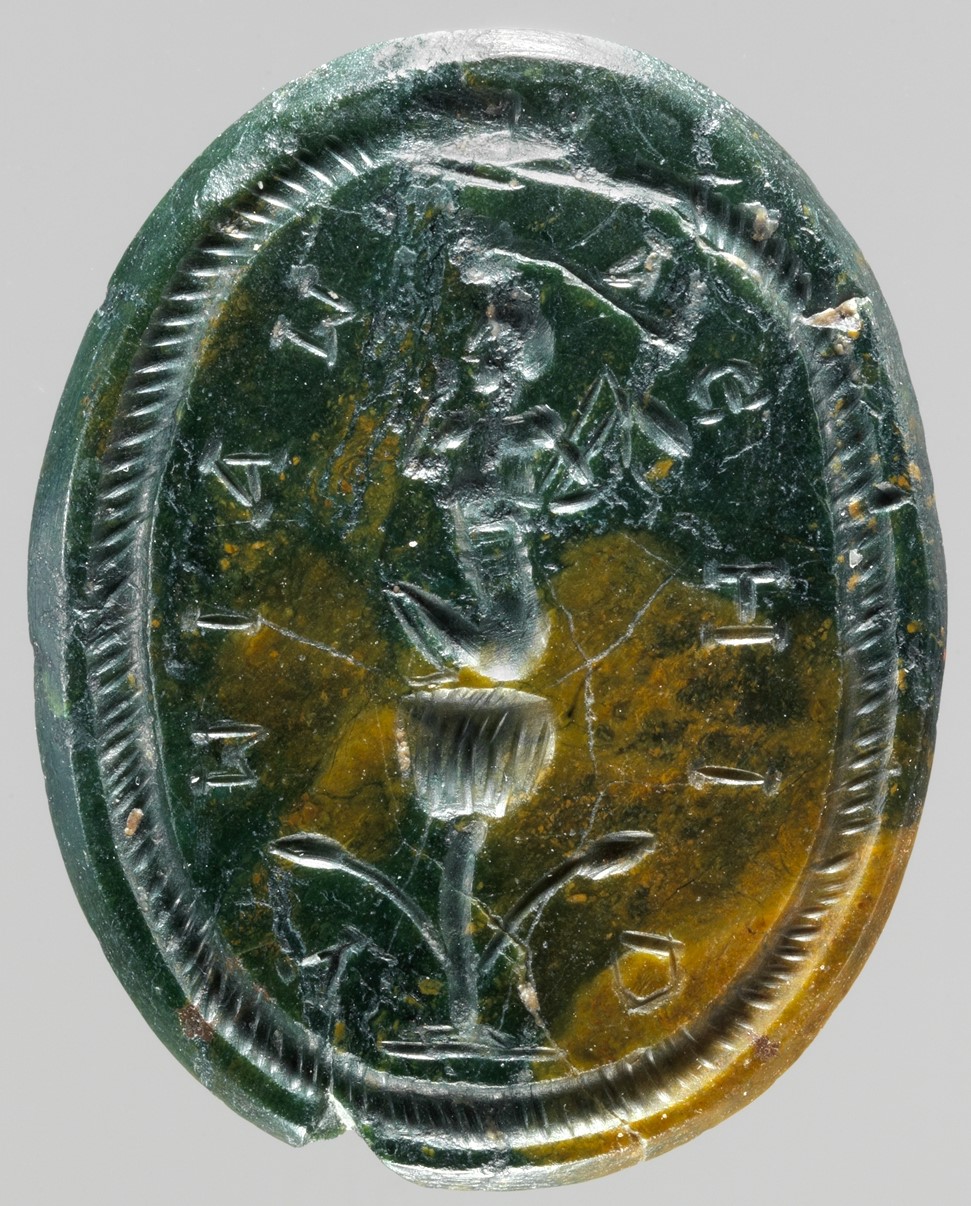 3) Harpocrates on a Lotus, surrounded by ouroboros. 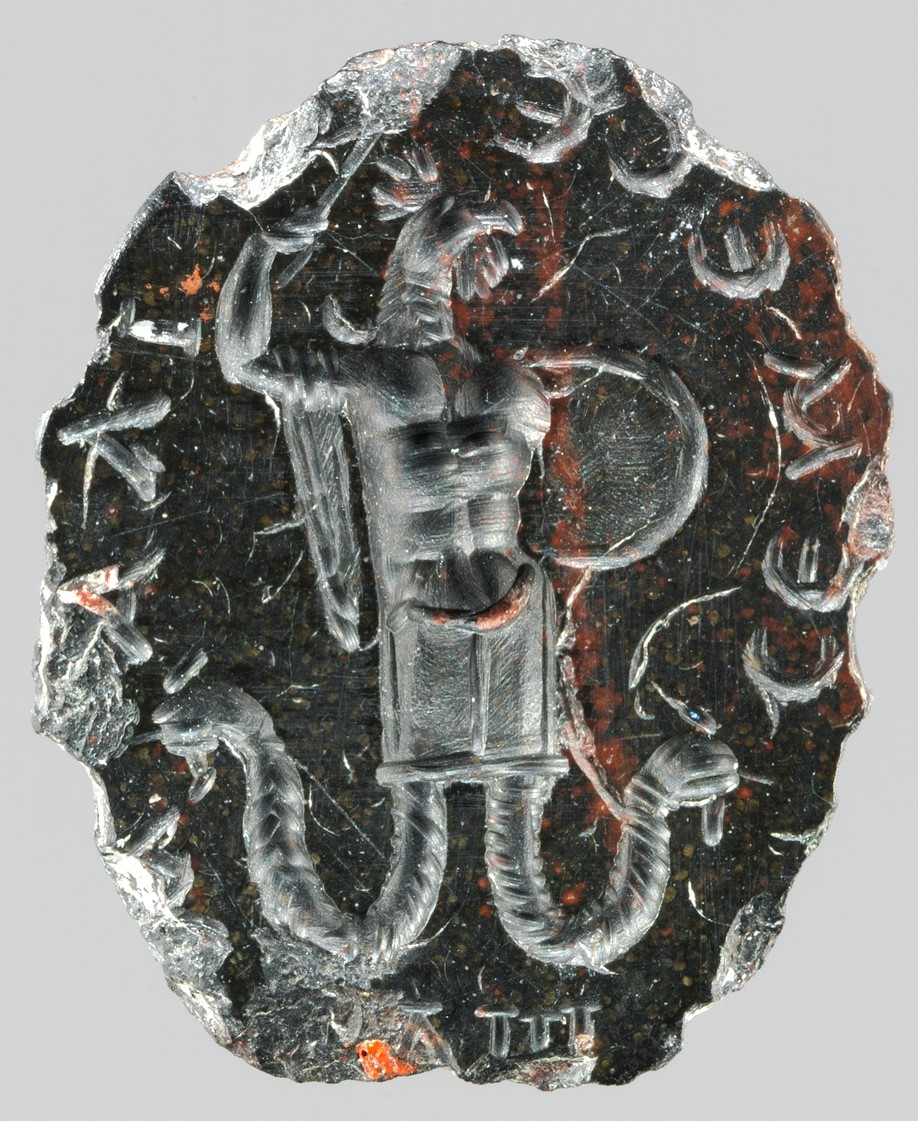 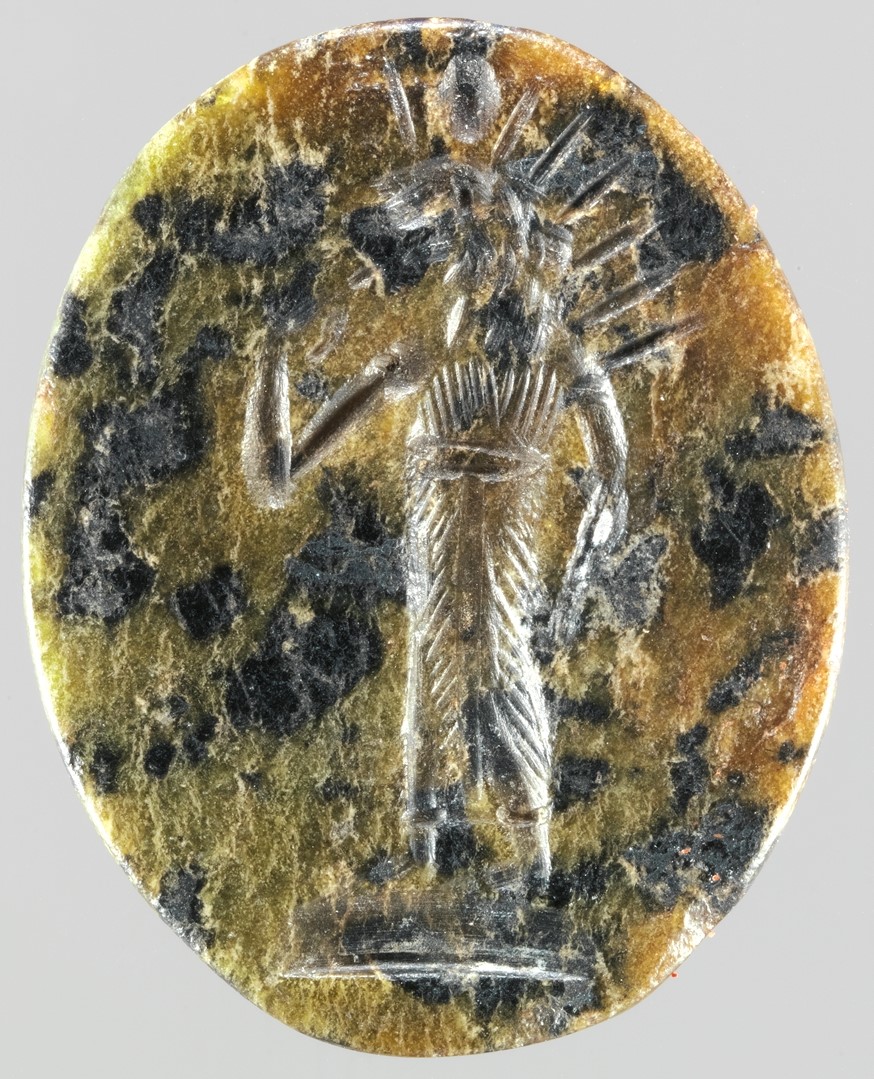 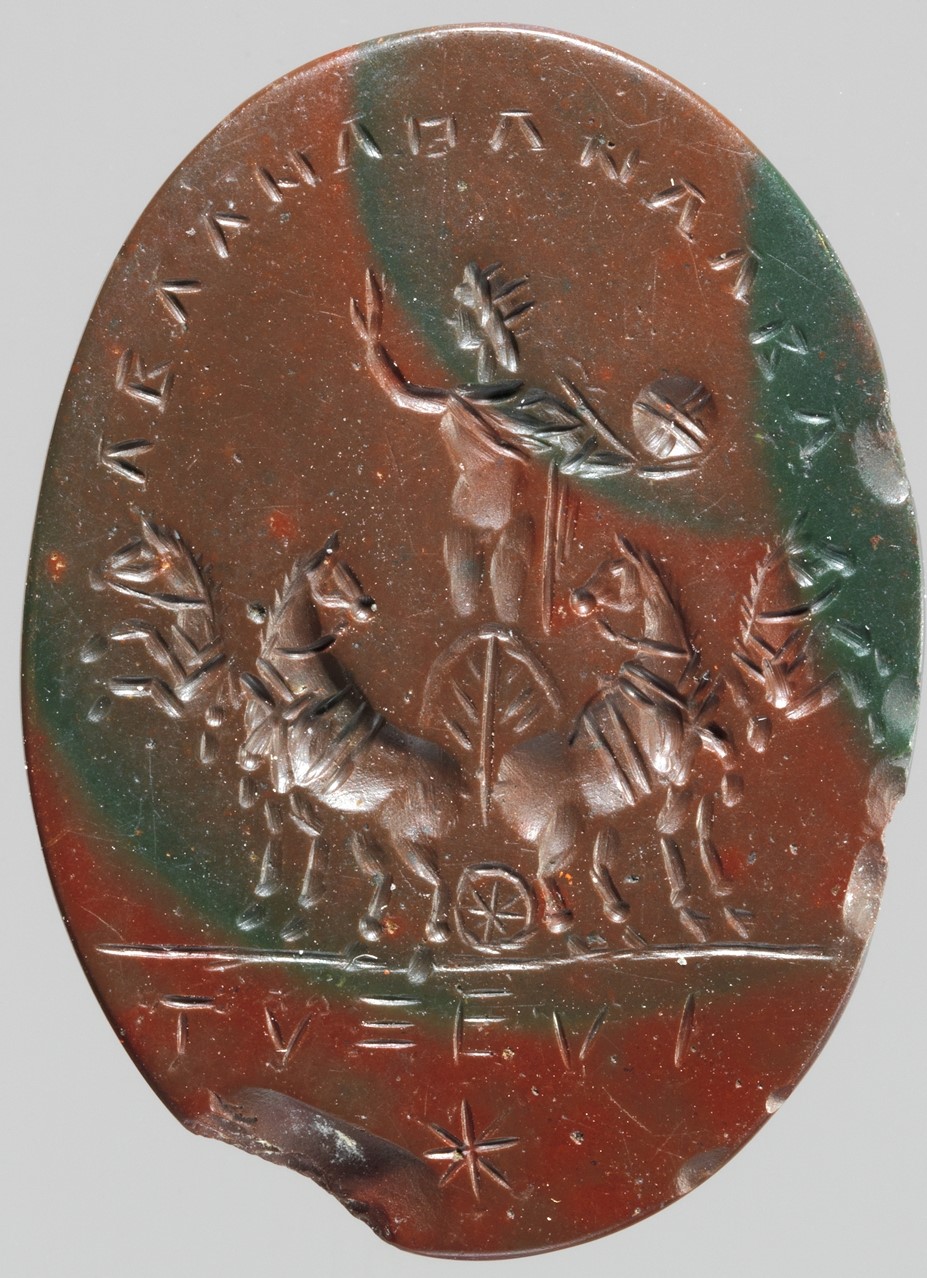 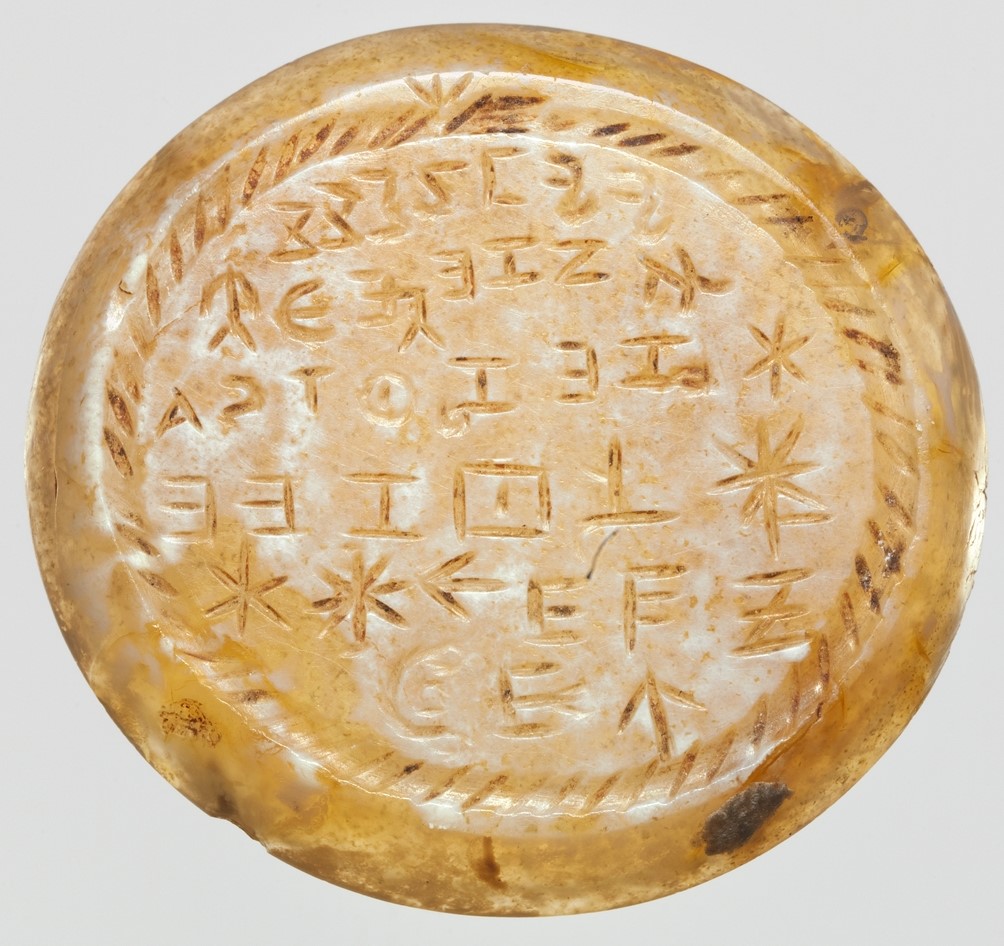 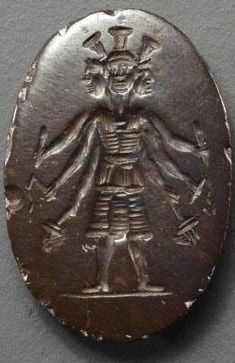 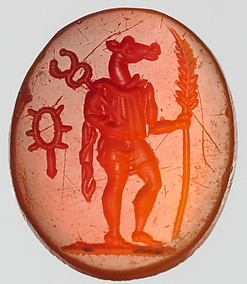 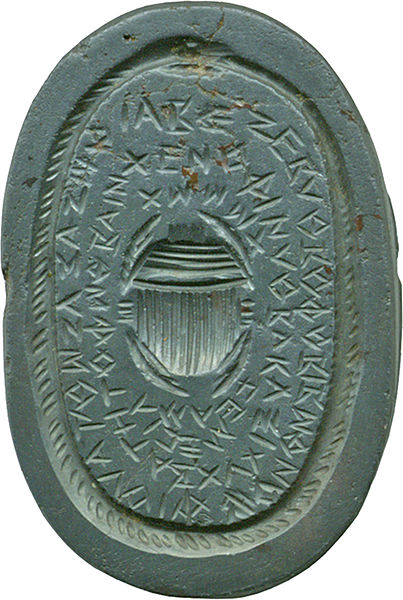 11) Gnostic Gem with Scarab and Ouroboros 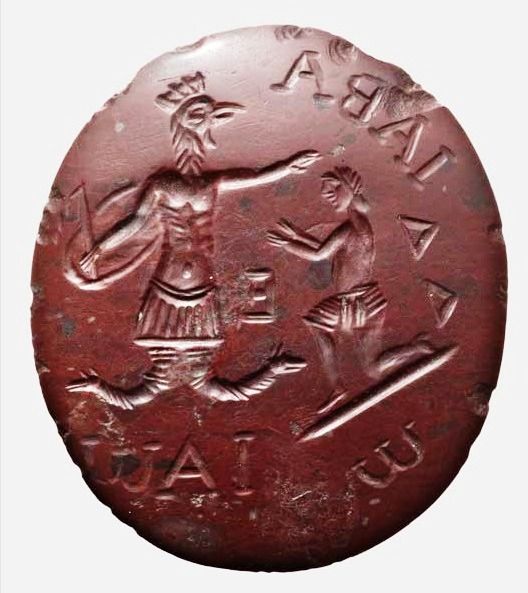 1) Cock-headed Anguipes with worshipper. Eastern Mediterranean, 2nd-3rd Century AD. Of red polished jasper, the obverse showing an Abraxas figure, with a blessing gesture, an adorant and a Greek inscription. The reverse shows a lion surmounted by a trident, a crescent and eight stars. Amulets such as these (aka Abraxas Stones) were kept in the hand, under the tongue or sewn into clothing. They bore inscribed formulas or spells and were intended to protect the owner or serve very specific magical purposes to the owner’s benefit. 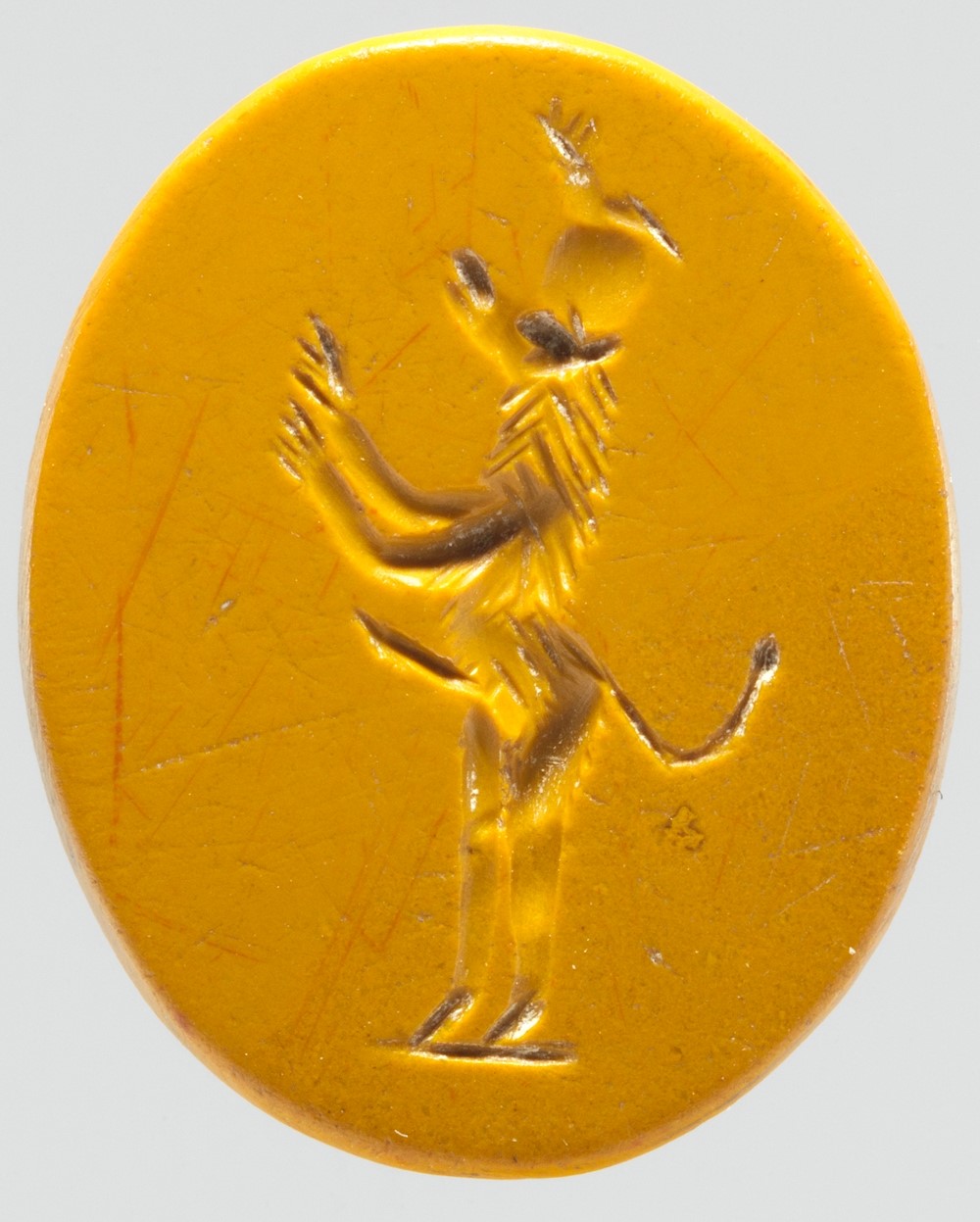 2) Cynocephalus. Cynocephaly was familiar to the Ancient Greeks from representations of the Egyptian gods, Duamutef (Son of Horus), Wepwawet (The opener of the ways), and Anubis (the Egyptian god of the dead). The Greek word (Greek: κῠνοκέφᾰλοι) "dog-head" also identified a sacred Egyptian baboon with the face of a dog. Reports of dog-headed races can also be traced back to Greek antiquity. In the fifth century BC, the Greek physician Ctesias wrote a detailed report on the existence of cynocephali in India, known as Indica. Similarly, the Greek traveller Megasthenes claimed to know about dog-headed people in India who lived in the mountains, communicated through barking, wore the skins of wild animals and lived by hunting. Herodotus reports claims by ancient Libyans that such creatures inhabit the east of their lands, as well as headless men and various other anomalies. (Wikipedia)

Wax Couple in Embrace, Upper Egypt, north of Assiut; original location not known. From the text it is clear that the pot and its contents were originally deposited in a cemetery. Four items: (1) two wax figurines portrayed in an embrace and wrapped inside two folded sheets of papyrus (Figure 14); (2) large papyrus sheet measuring 22.5 x 55 cm., with fifty-three lines of writing; (3) blank sheet of papyrus used to protect the sheet with writing; (4) fragments of a clay pot into which the folded sheets and wax figurines were stuffed; the pot was then sealed with chalk or plaster. The editor assigns a date in the fifth century C.E. Our couple is the only Greco-Roman example portraying such an embrace. Curse Tablets and Binding Spells from the Ancient World. Cary, GB: OUP Oxford, 1999. ProQuest ebrary. Web. 7 July 2016. FIGURE 14., p. 102. 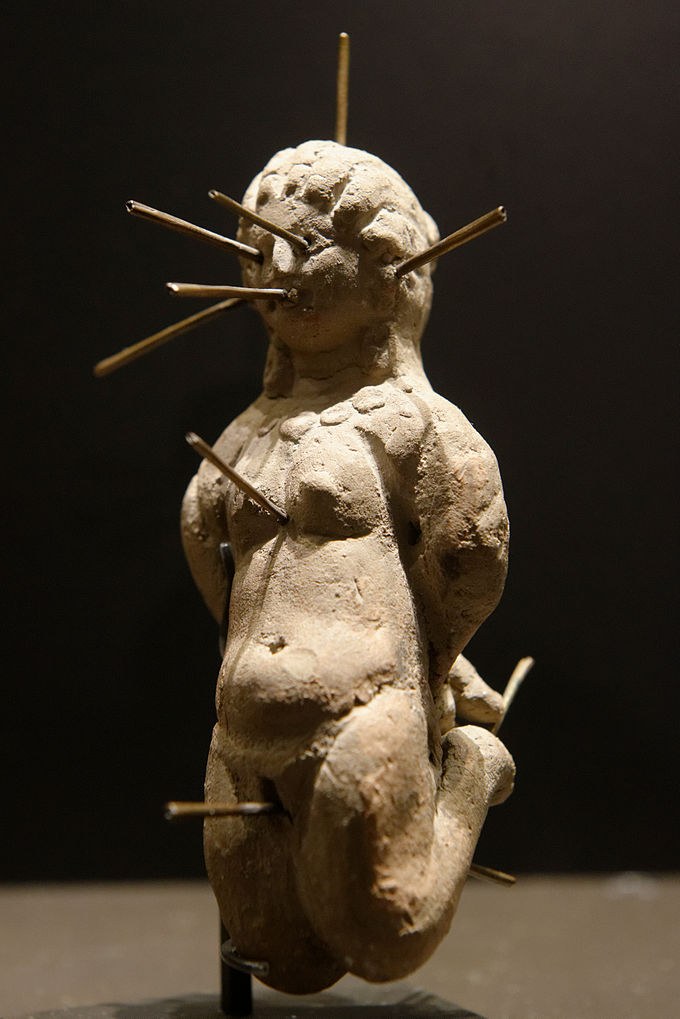 Elegant female figurine pierced by thirteen needles and found with defixio in a clay pot from Egypt. The figurine is made according to directions in a recipe preserved in PGM IV, lines 296-329. As the recipe instructs, the figurine has her arms behind her back and rests on her knees (lines 301-2); she is also pierced with thirteen nails, as prescribed (lines 320ff.). The tablet names the client as Sarapammon, son of Area, and the desired woman as Ptolemais, daughter of Aias and Origenes. The spell invokes a number of deities, but the immediate agent is the spirit of a dead man, whose name is Antinous (Hadrian's friend?) and whose task it is to carry out the charge. In return for the successful completion of its charge, the client promises to release the spirit of Antinous from its restlessness. The occasion is love-longing; whether marriage is the ultimate goal is not certain, though Sarapammon does envisage a long-standing relationship with Ptolemais.
Curse Tablets and Binding Spells from the Ancient World. Cary, GB: OUP Oxford, 1999. ProQuest ebrary. Web. 7 July 2016.
Copyright © 1999. OUP Oxford.

On this sarcophagus lid two men carry a corpse toward a funeral pyre while women mourn and tear their hair. On the far right a young male (perhaps Mercury?) holds a leashed Cerberus, the hound of Hades.