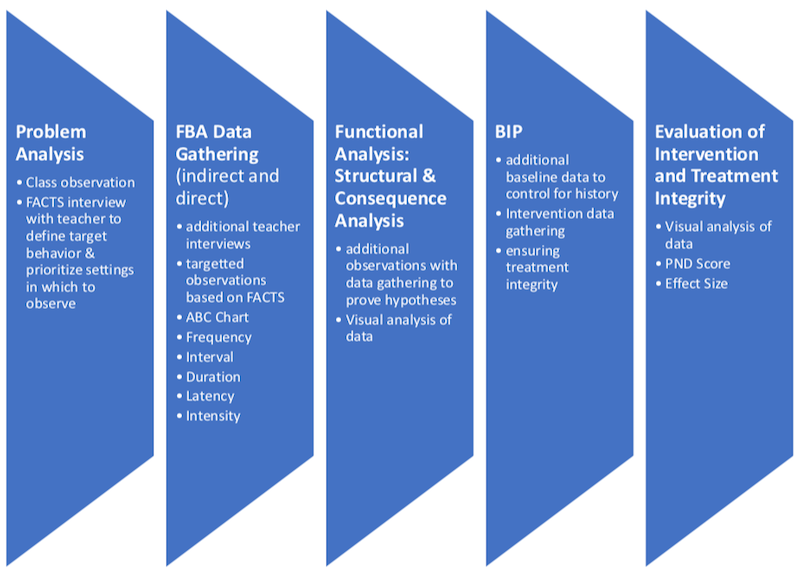 INTERVIEW the teacher using the FACTS form to define behavior in observable and measurable terms and then collect indirect data.

OBSERVE the behavior as a means of collecting direct data.

HYPOTHESIZE about the function of the behavior.

WHAT MATERIALS DO I NEED FOR THE INTERVIEW?

Bring two copies of the FACTS interview form, one for you and one for the teacher being interviewed, so they can follow along.

Can I just drop it in the teacher’s box to complete?

No. You should guide them through the interview and record their responses on your form, as follow up questions may be needed.

When conducting an interview using the FACTS Form, always start with the student’s strengths.

You will then identify the student’s daily routines because you want to determine during which routines does the interfering behavior occur the most frequently. The assessment must narrow the focus to a specific pattern of behavior in order to develop an effective intervention.

Where, when, and with whom are the problem behaviors more likely?

Identify the Problem Behaviors for the Identified Routine

You will conduct an ABC observation during the identified routine, as determined in the FACTS.

The purpose of ABC observation is to: 1) confirm the accuracy of the teacher interview; 2) identify antecedents and consequences that the teacher   may have overlooked; 3) verify the function of the student’s behavior; and 4) develop the most accurate Summary Statement for intervention development.

When observing the most problematic behavior in the identified routine with the ABC Chart:

1. Always start with the behavior first—be as specific as possible – and then the time

2. Write the activity occurring in class

3. Write the Antecedent that occurs before the behavior

4. Write what happened right after the behavior occurred in the Consequence box

5. During or Immediately after the observation Check the boxes that correspond with the activities, antecedents, and consequences you recorded

6. Figure out the Intensity Level:

Level 1: Only impacts the student

Level 2: Impacts others in immediate area

Level 3: Impacts everyone in class

7. After the observation, summarize the results from the ABC Observation using the Tally of ABC Results form.

8. Compare the observation data with the interview data

-Do another ABC observation

-Interview other staff that interact with student during target routine

Frequency recording is usually conducted with low-incidence discrete behaviors that can be tallied using the Frequency Recording Form.
It is not the best strategy for sustained behaviors (e.g., time on task), high frequency behaviors, and with behaviors that are difficult to figure out when they start and stop.
For each session you observe, you can calculate the frequency rate of the target behavior (e.g., how many times per minute does the behavior occur?).
total # tallies
frequency rate = --------------------
total time observed

Interval recording entails observing and recording the occurrence and nonoccurrence of a behavior at predetermined units of time.
Partial Interval Recording: Behavior is recorded if it is observed for any part of the interval

Directions for Partial Interval Form for Target Behaviors: Place a "+" in the interval if the target behavior occurred some time during that interval. If it did not occur, then place a "-".

Directions for Partial Interval Form for Off-Task Behaviors: Place a "-" in the interval if the student is off-task some time during that interval. If the student is on-task, then place a "+".

Whole Interval Recording: Behavior is recorded only if it was observed during the entire interval

Duration recording involves recording the total amount of time that the behavior occurs.
It is most applicable for sustained behavior.

Use the Simple Form when you are observing a single behavior and recording its duration.

If you are observing multiple related behaviors but wish to designate each duration separately, you can use the Minute-by-Minute Form. 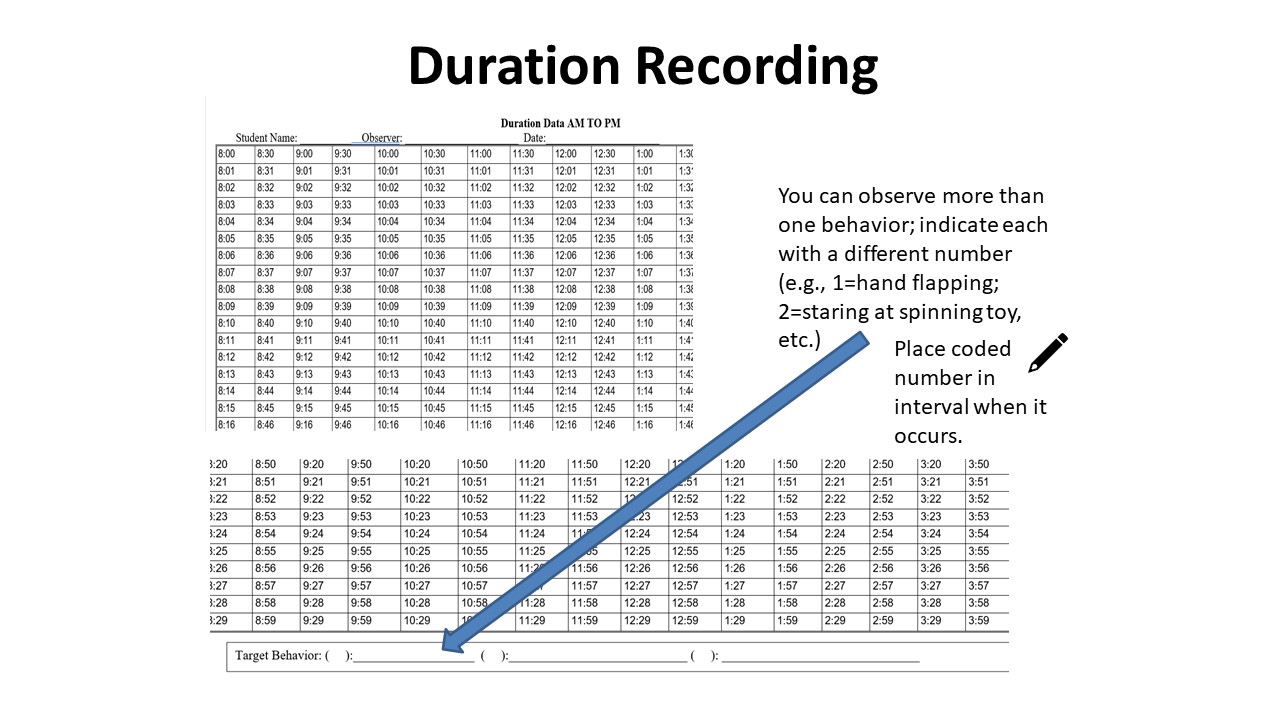 Latency recording involves recording the length of time that has elapsed between a teacher's directive and the child beginning the task. The Latency Data Form organizes the data according to task.

Intensity measurement is critical to determining the severity of a behavior.

Level 1: Only impacts the student

Level 2: Impacts others in immediate area

Level 3: Impacts everyone in class

Input your baseline data using Excel and then create the line graph in Excel. 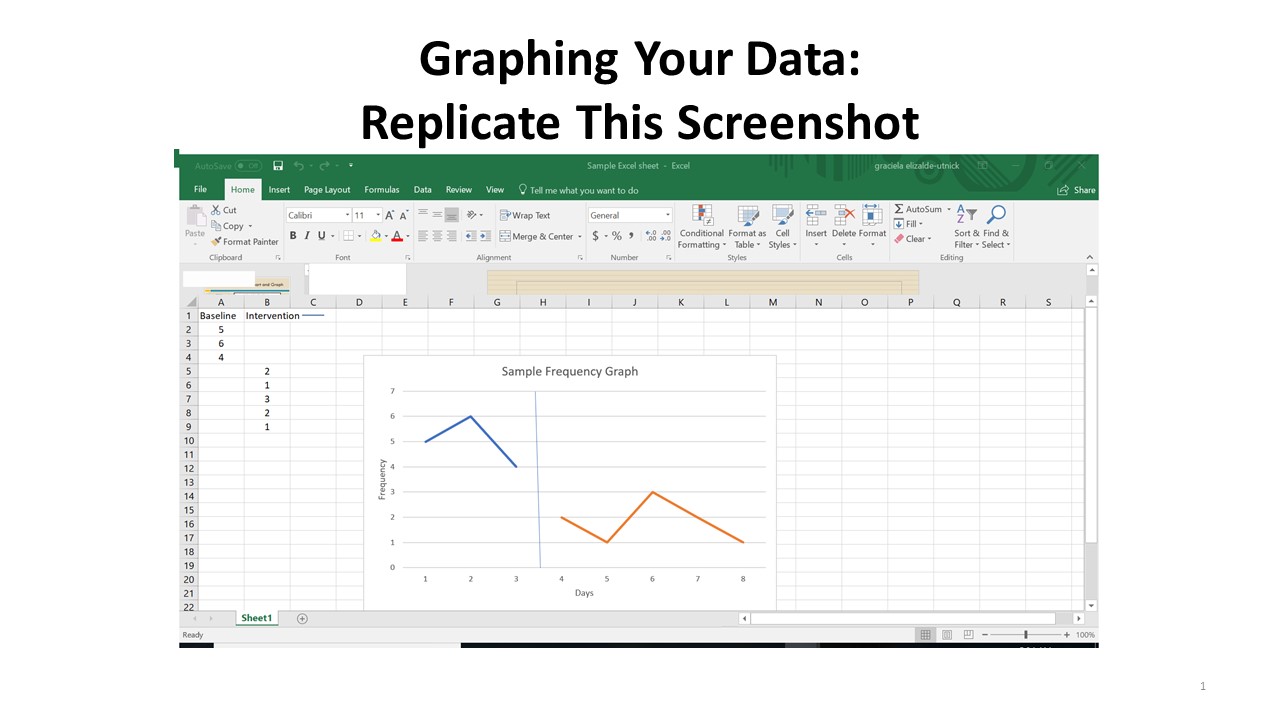 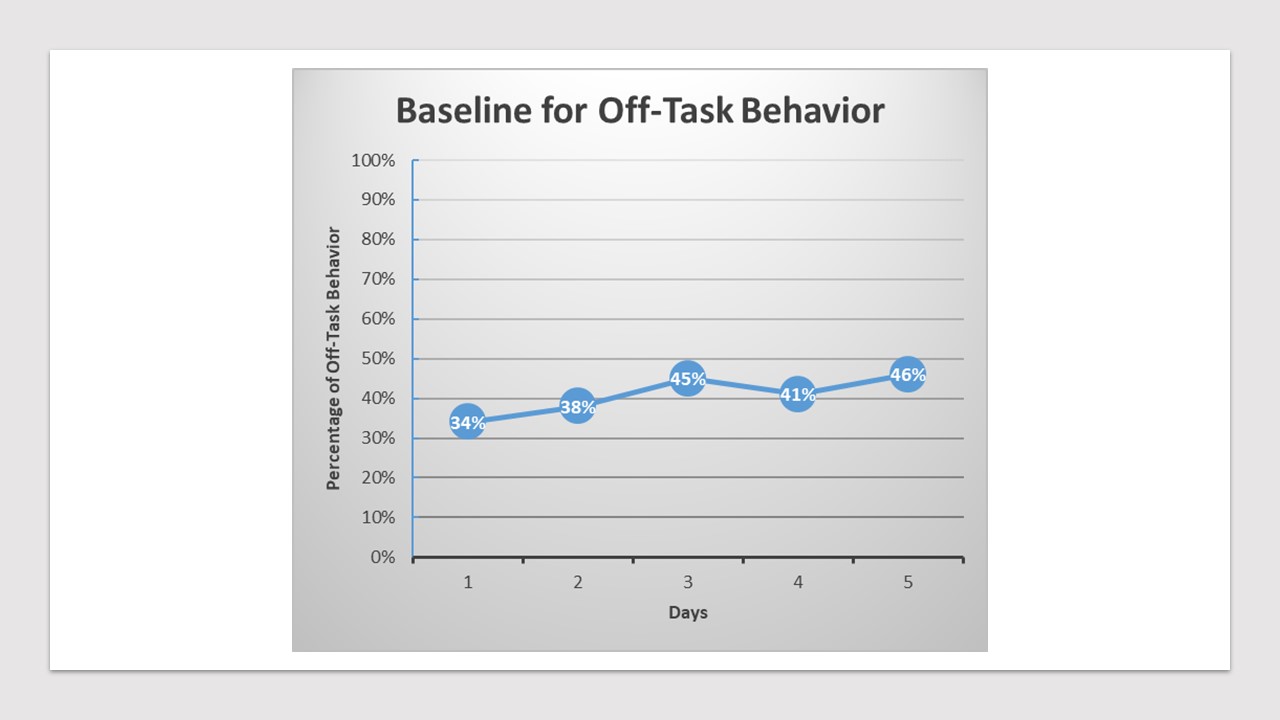 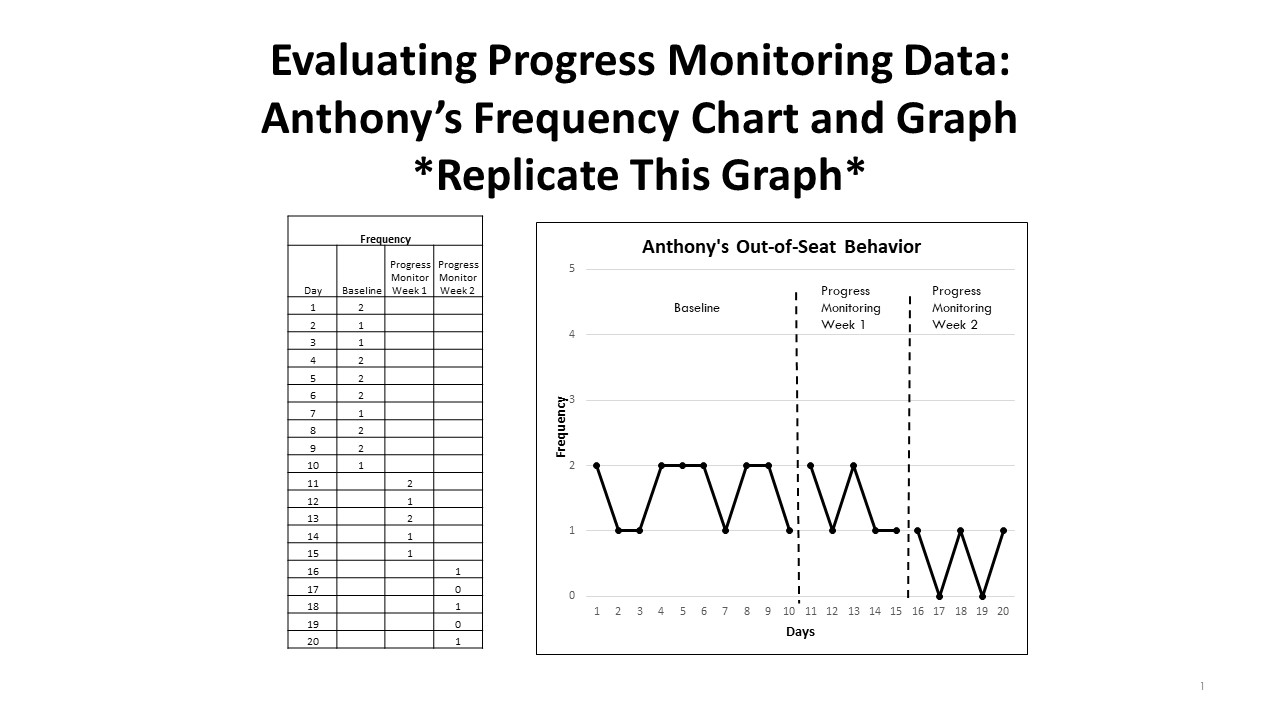 Functional Assessment: a variety of approaches that attempt to identify the antecedents and consequences for interfering behaviors

Functional Analysis: the systematic manipulation of environmental events to experimentally test their role as antecedents or consequences in controlling or maintaining interfering behaviors

There are two types of analysis: Structural and Consequence Analysis 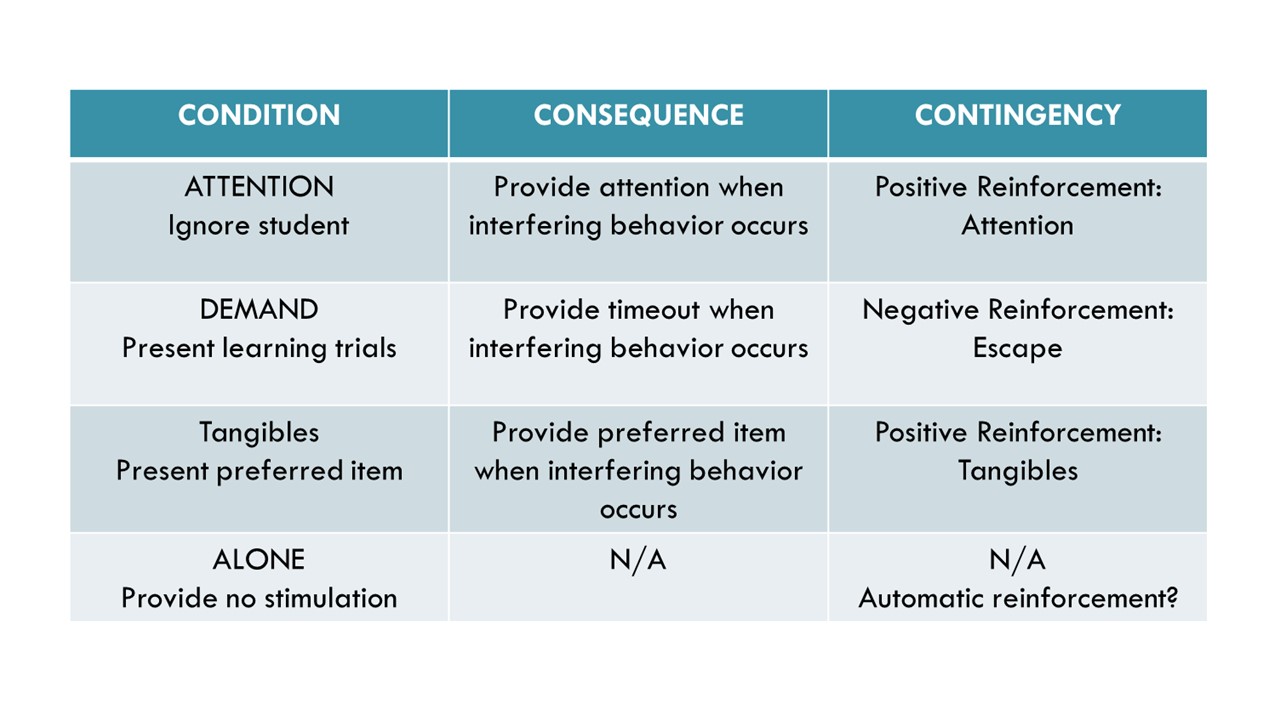 To determine the results of the functional analysis, you need to graph your data and conduct a visual analysis of the data points. 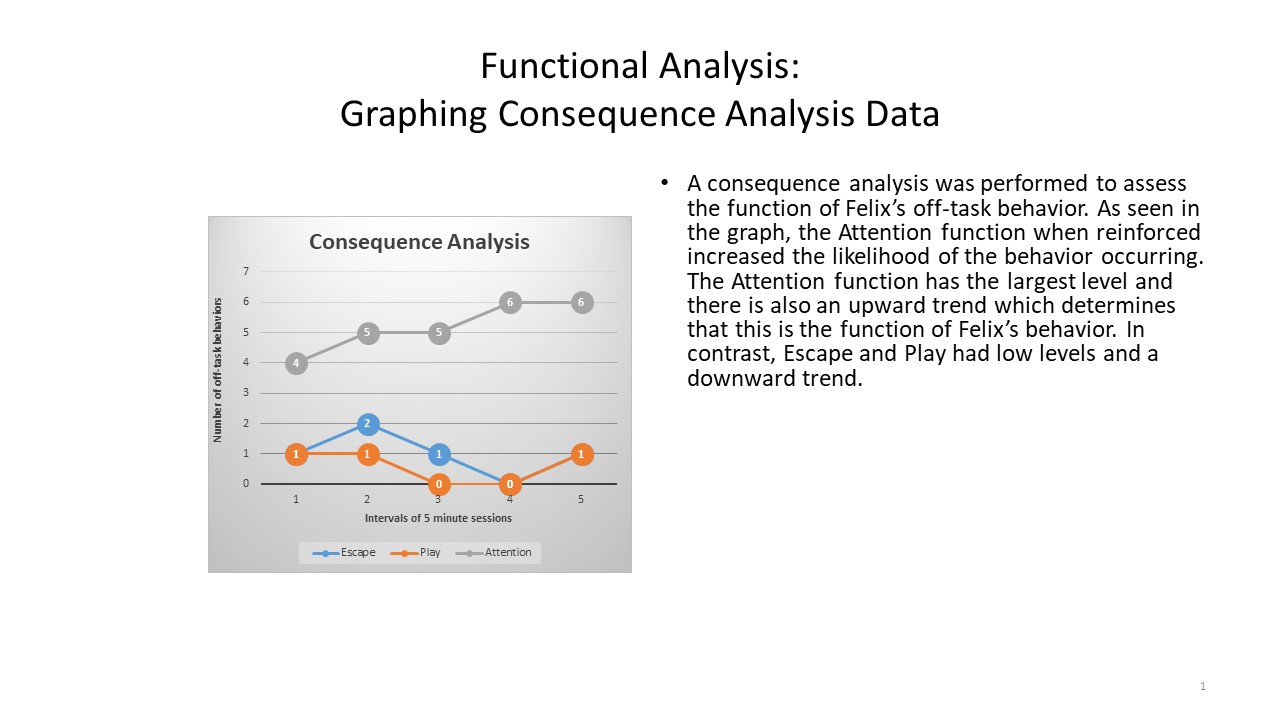 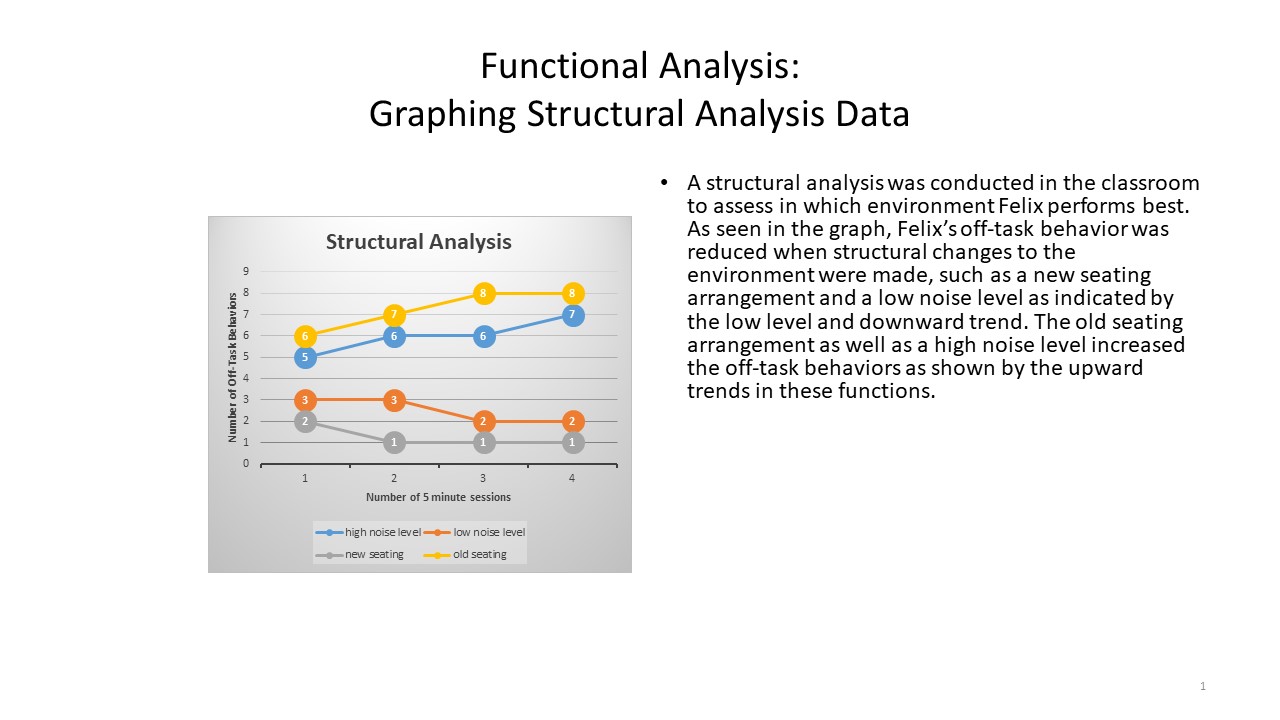 The most important purpose of conducting an FBA is to inform the development of comprehensive Behavior Intervention Plans that directly address the FUNCTION of student behavior.
The critical components of a BIP are:

2. PREVENT problem behaviors by directly addressing triggers & prompting replacement behaviors based on the function of behavior.

3. REINFORCE replacement & desired behaviors based on function/pay-off for the student.

5. MINIMIZE REINFORCEMENT by ensuring that problem behaviors do NOT pay off for the student (i.e. does not result in the function of behavior)

Replacement Behaviors are 1) an immediate attempt to reduce disruption & potentially dangerous behavior in the classroom; 2) take some of the pressure off the teacher; and 3) are designed to actively begin breaking the student’s habit of using problem behavior to meet their needs, by replacing it with a more acceptable replacement behavior.

An appropriate Replacement Behavior:
–Serves the same function as the problem behavior

–Is easier to do and more efficient than the problem behavior

Teach the replacement and desired behaviors:

THEN – Teach the Desired Behavior

2. Prevent problem behaviors by directly addressing triggers & prompting replacement behaviors based on the function of behavior.

Prevention Interventions must address the function the problem behavior serves.

After the Replacement Behavior has been taught, prompts and pre-corrections are used to support and help remind the student to use replacement/desired Behavior.

3. Reinforce replacement & desired behaviors based on function/pay off for the student.

5. Minimize Reinforcement by ensuring that problem behaviors do NOT pay off for the student (i.e. does not result in the function of behavior).

Responding to Problem Behavior should focus on 2 things:

1. Redirecting toward the Replacement Behavior

2. Minimizing the pay-off the student has been receiving for the problem behavior

Once you collect your intervention data, you need to evaluate how effective the intervention has been. In order to do so, you follow these steps:

To accurately assess single-subject treatment effects, one has to:

1. Graph your baseline and intervention data on the same graph;

3. Determine the percentage of non-overlapping data; and

It is also important to evaluate treatment/implementation integrity. 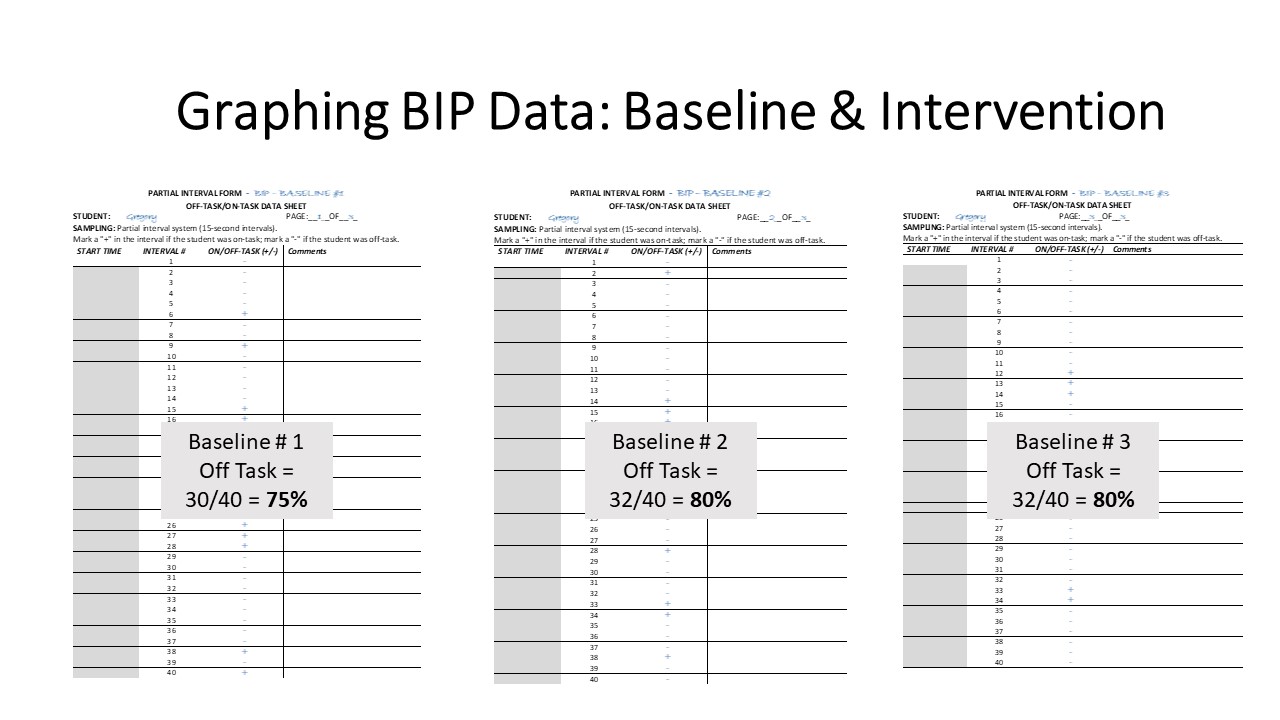 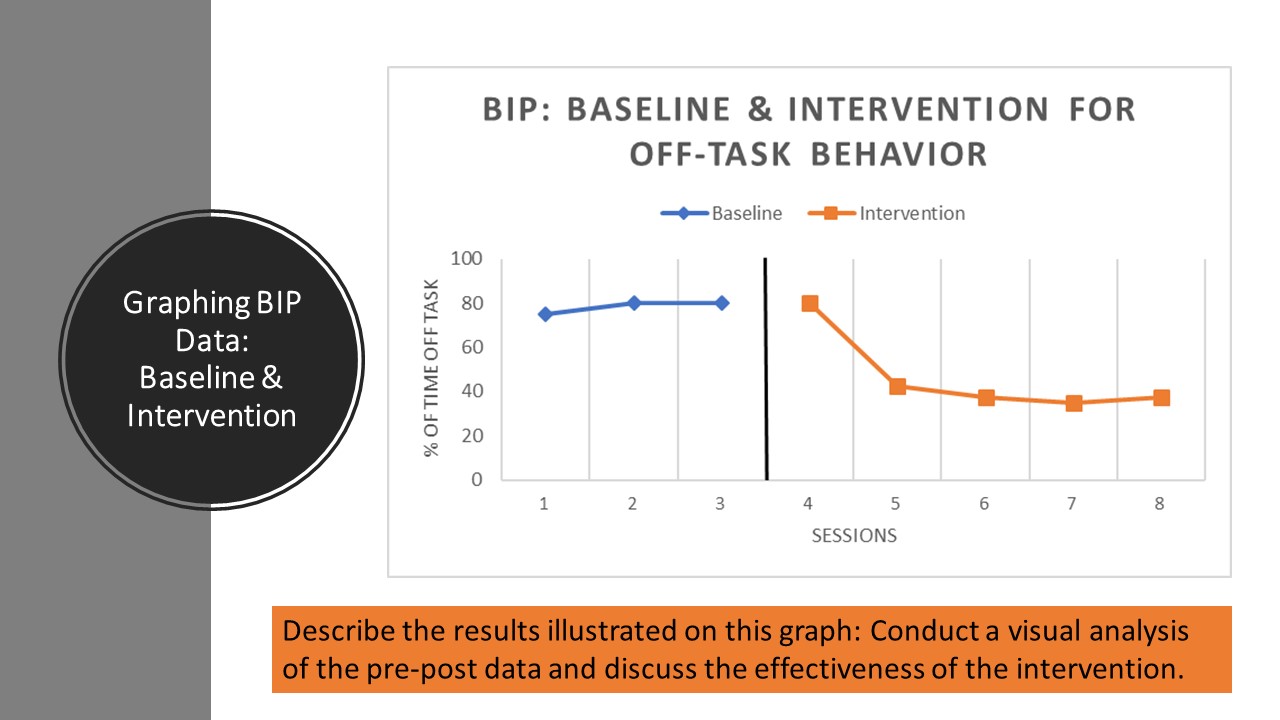 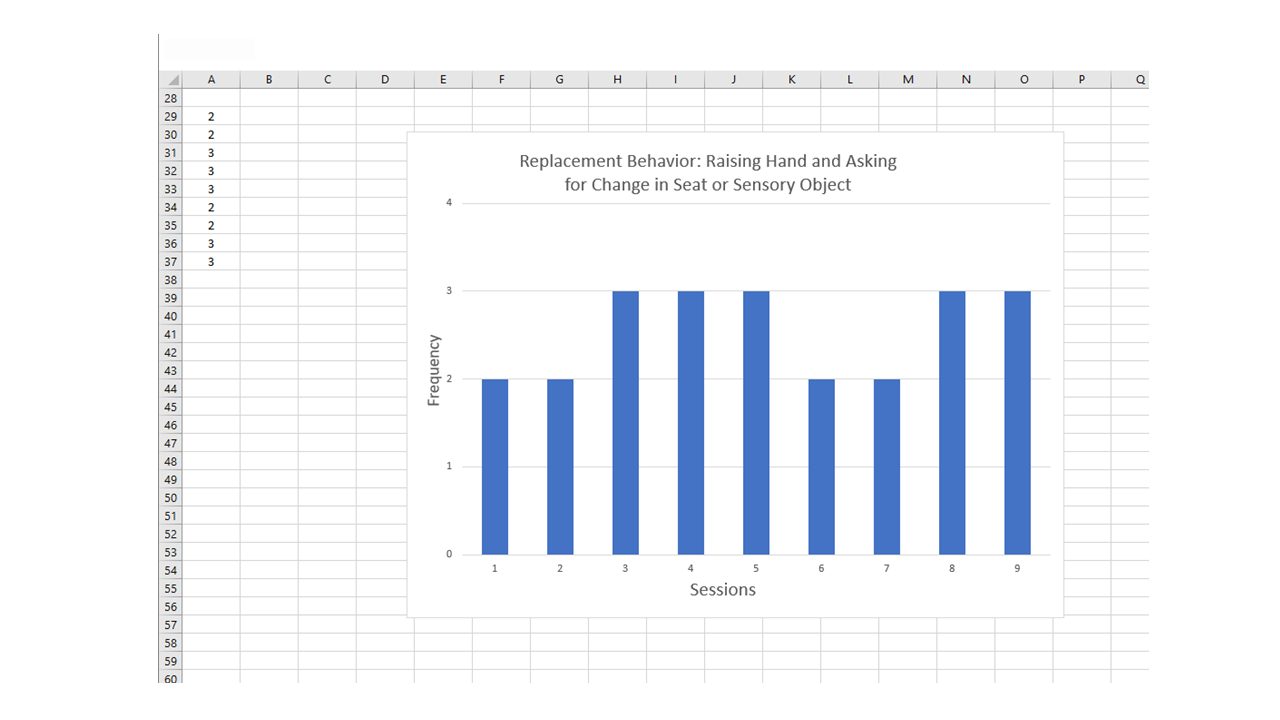 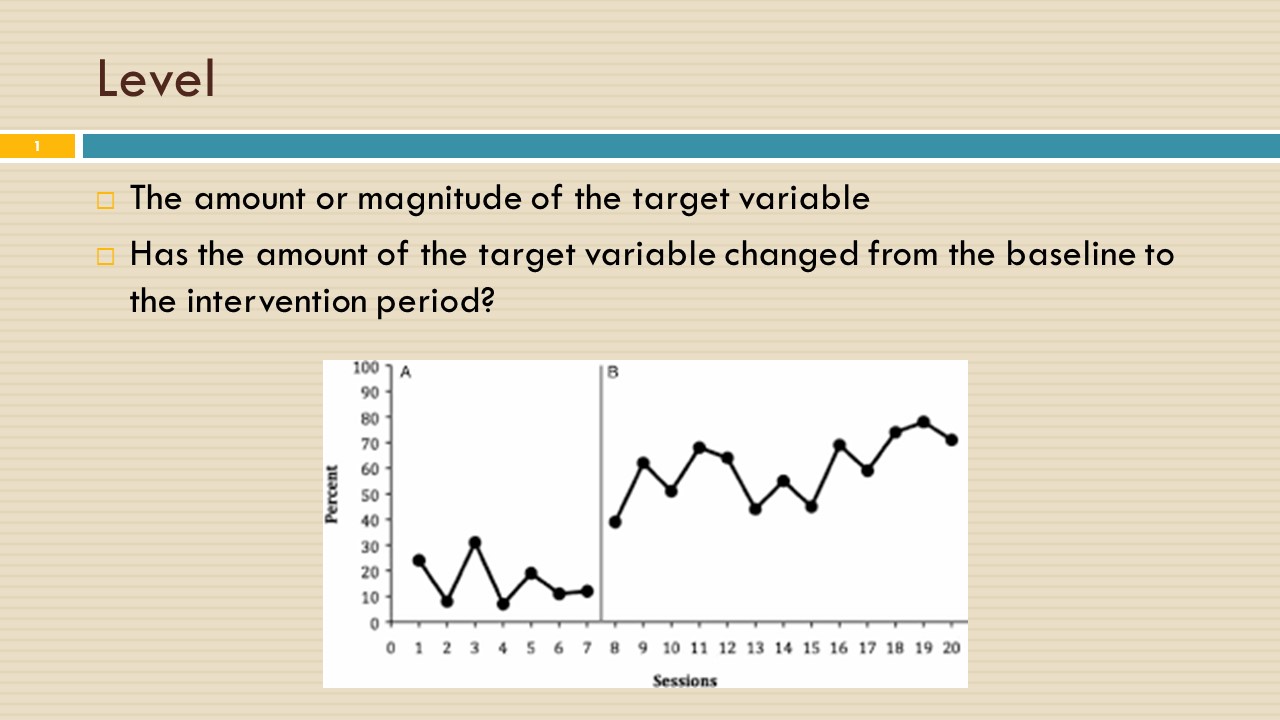 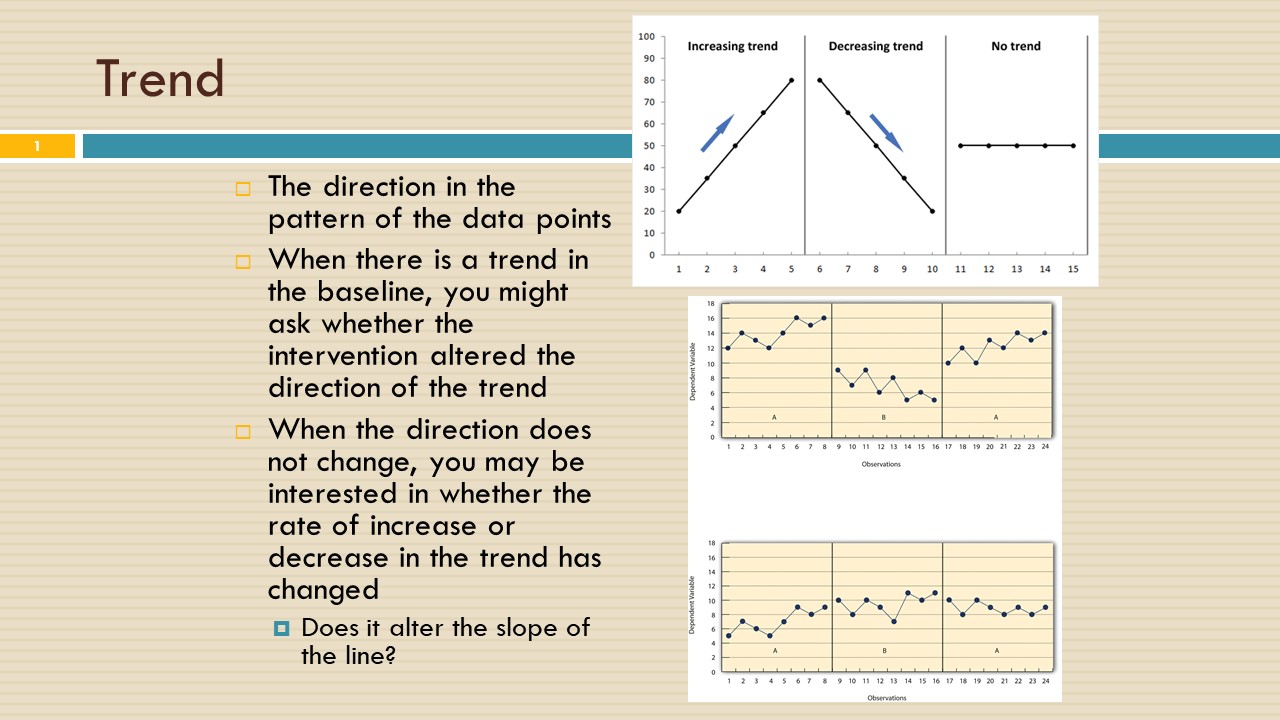 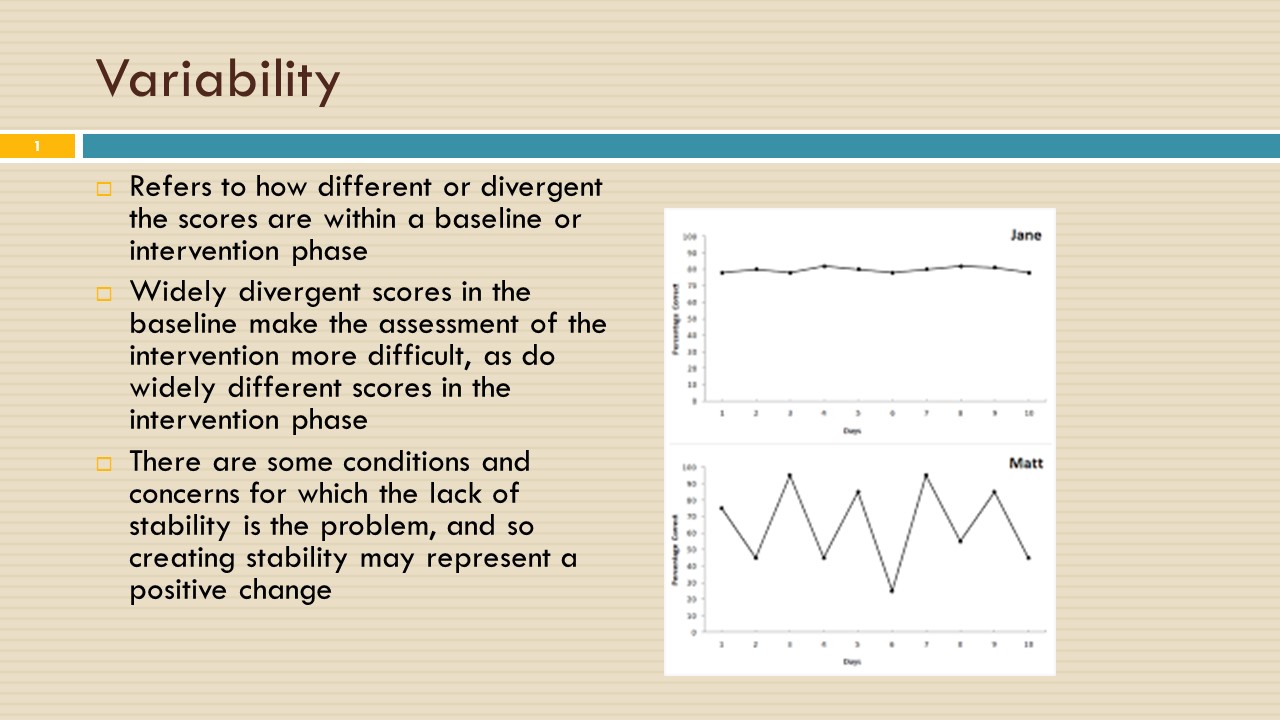 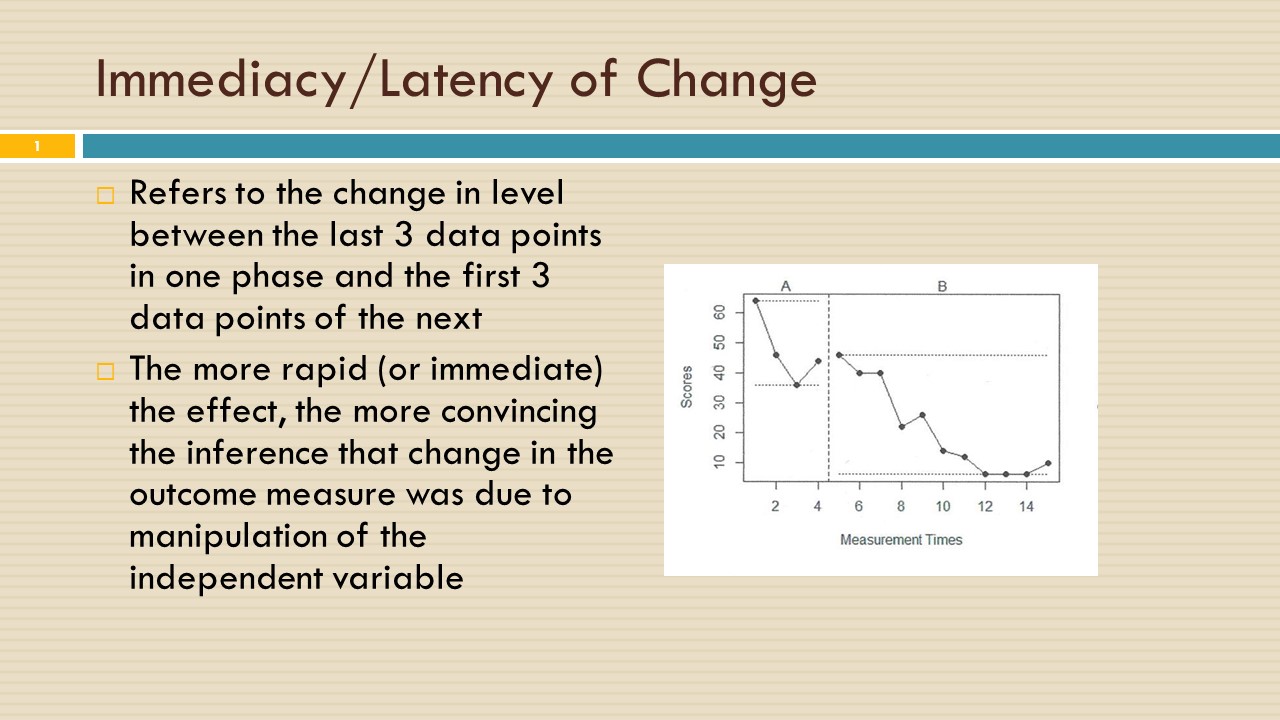 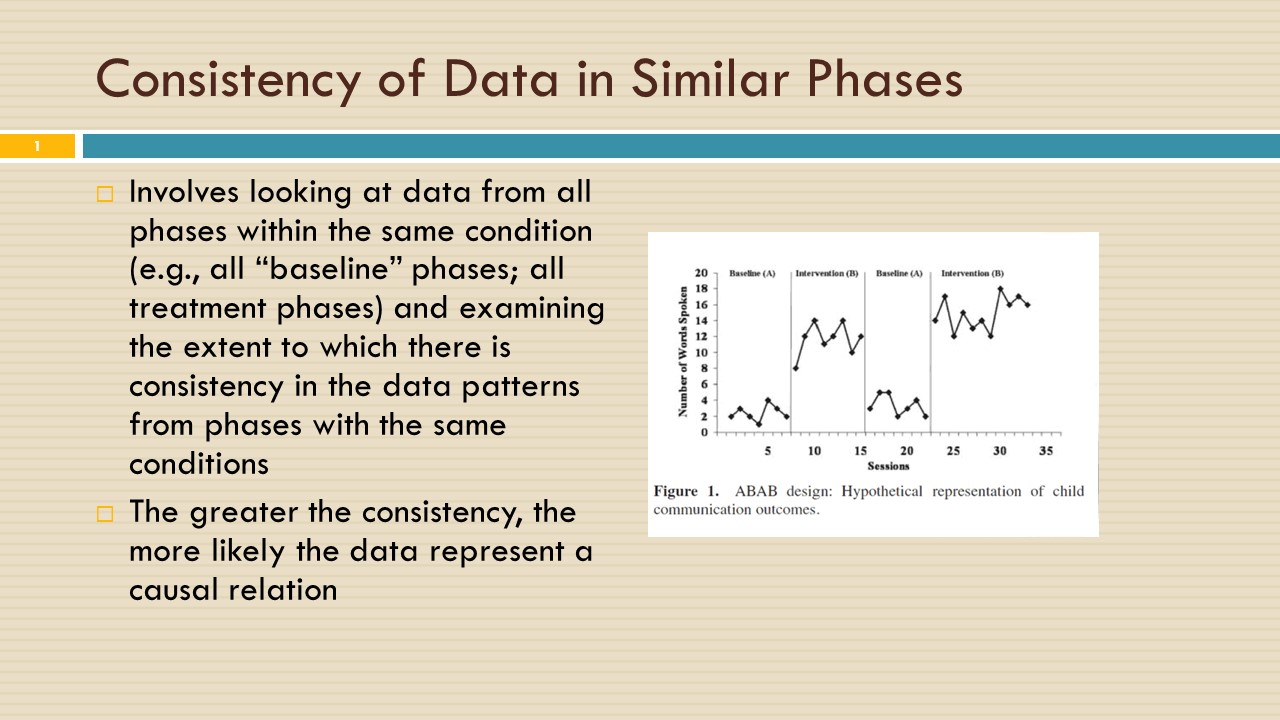 3. Determine the percentage of non-overlapping data 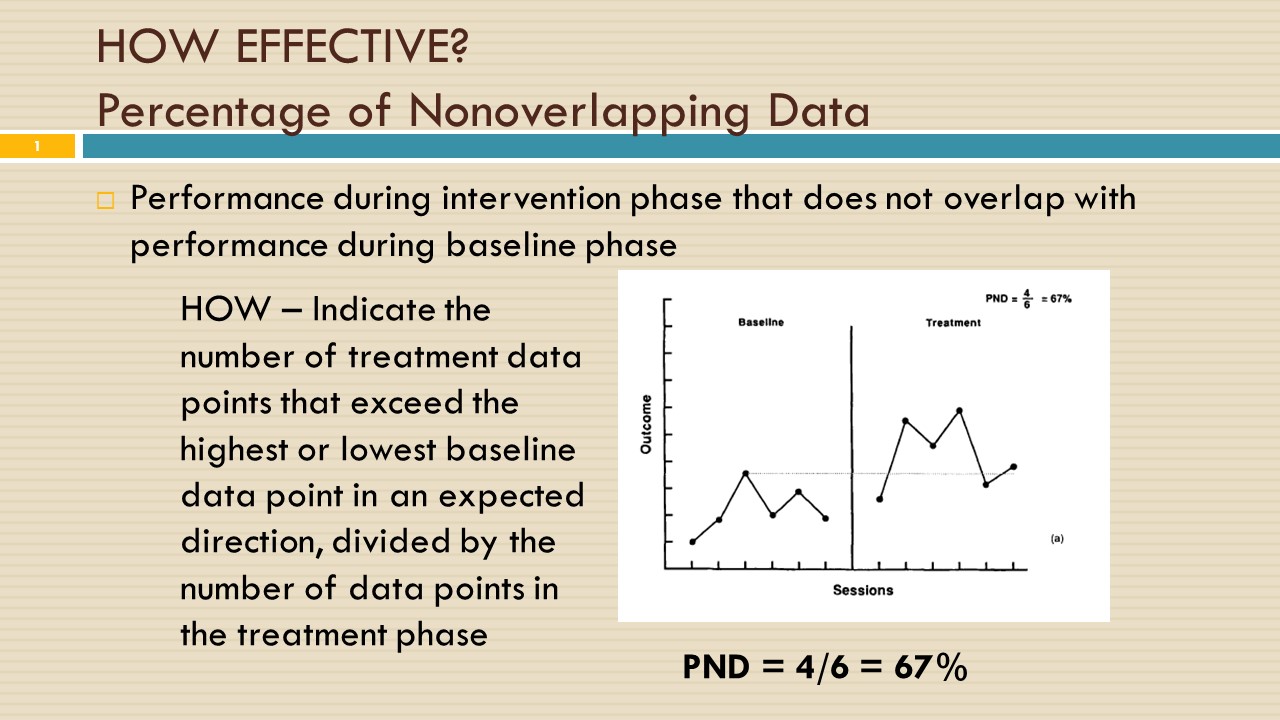 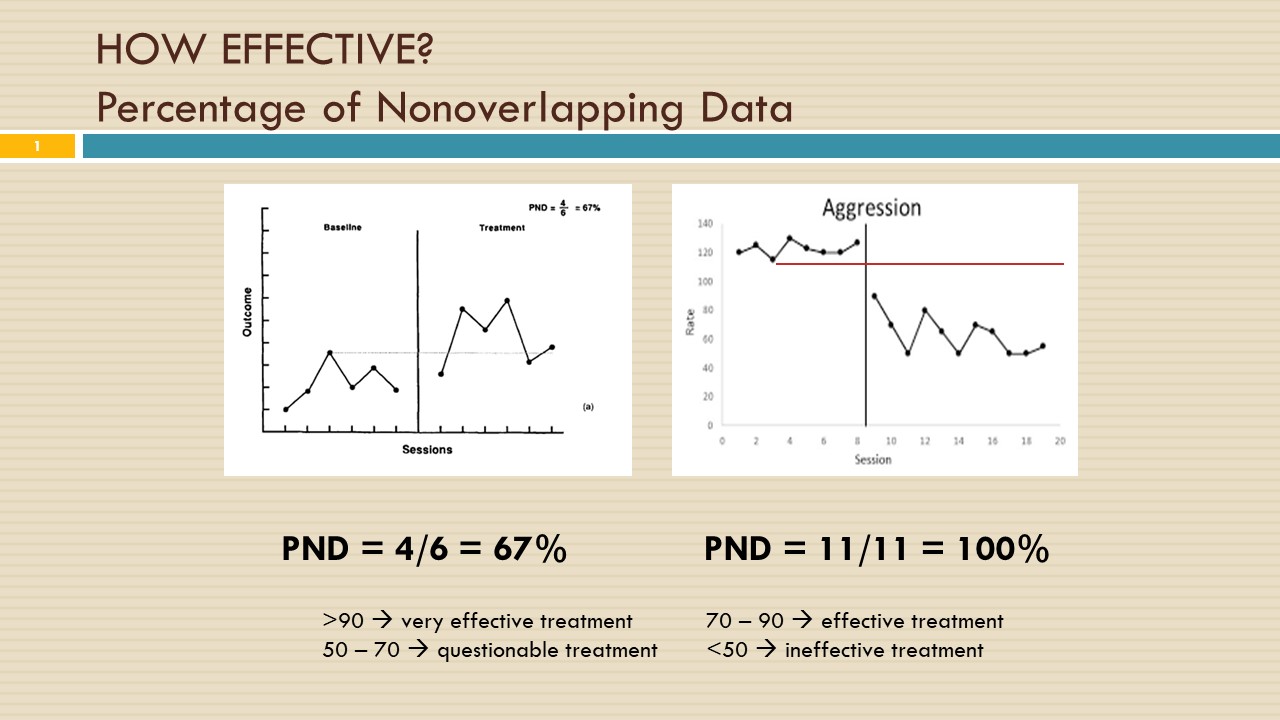 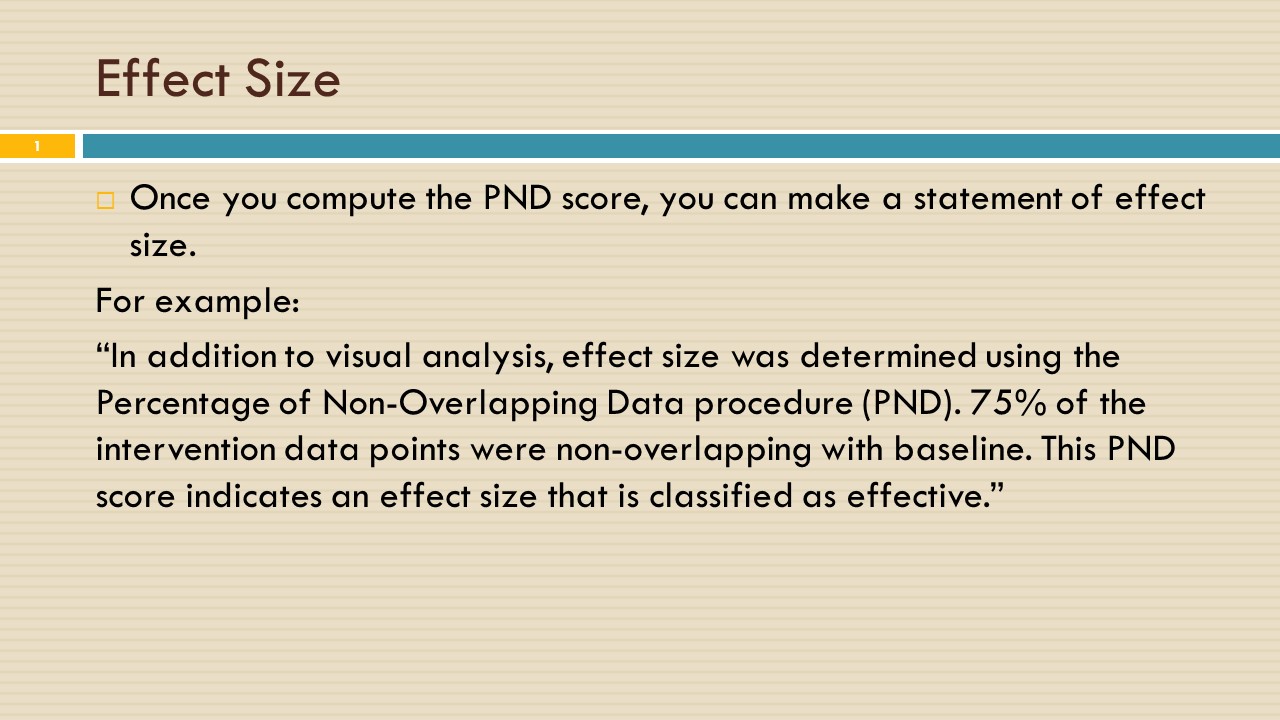 Using the above graph, describe the change in the target behavior from baseline to intervention by conducting a visual analysis.

Then compute the PND score and determine the effect size.

How effective is the treatment?

1. Systematic observation of the behavior in the classroom

2. Indirect methods can be used to supplement the direct observation