4. World War One: The Balfour Declaration and the making of the British Mandate (June 10) 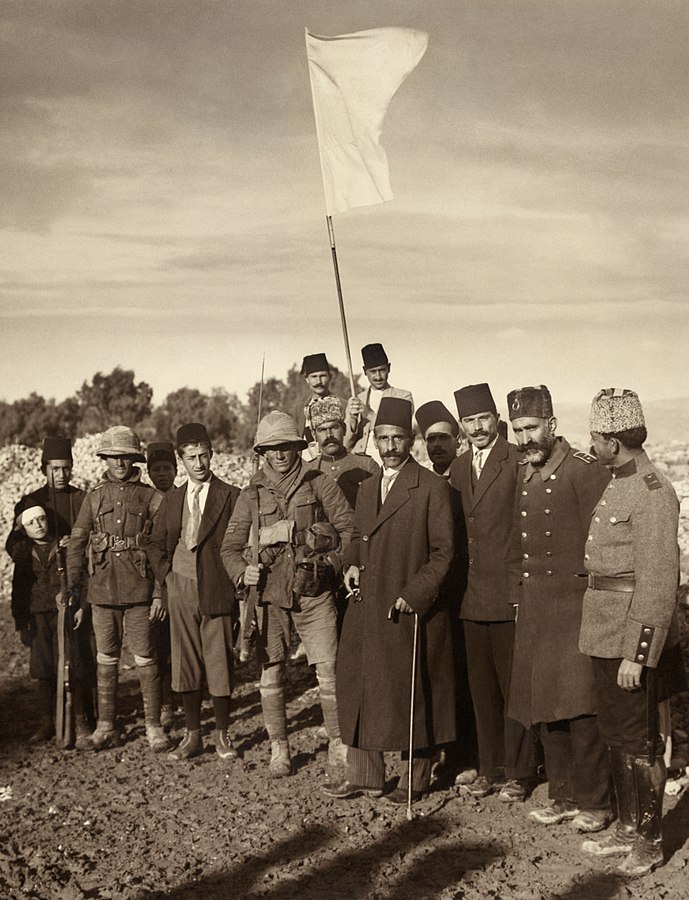 Description (Wikimedia): The Mayor of Jerusalem, Hussein Salim Al-Husseini (with walking stick and cigarette), with his party under a white flag-of-truce, attempts to deliver the surrender document signed by the Ottoman Governor Izzat Pasha just outside Jerusalem’s western limits on the morning of 9 December 1917 to Sergeants James Sedgewick and Frederick Hurcomb of 2/19th Battalion of the London Regiment (fourth and seventh from left in the picture). The surprised sergeants, who were scouting ahead of General Sir Edmund Allenby's main force, refused to take the letter, as did several more arriving troops. The Mayor was accompanied by a number of officials including his nephew Toufiq Saleh Al-Husseini, police inspectors Abdelqadir Al-Alami and Ahmad Sharaf (Second from right in the picture), policemen Hussein Al-Assaly and Ibrahim Al-Zaanoun, as well as a group of young men among whom were Rushdi Mohamed Al-Muhtada, Jawad Ismail Al-Husseini, and Hanna Iskandar Al-Lahham, who carried the white flag. The Mayor was also accompanied by a young photographer named Lewis Larsson, who later became Swedish Consul in Palestine, and whose role was to record the ceremony. It began to look to the Jerusalemites as if nobody would let them surrender, until Brigadier-General C.F. Watson, commanding 180th Infantry Brigade entered the town, accepted the documents, and Larsson could photograph the event properly.