The Federal Art Project (FAP) was the largest of the New Deal’s art and culture initiatives employing artists to adorn the public buildings constructed with WPA funds. Artists in the U.S. reacted positively to the FAP not only because it provided work and support as they developed their talent, but also because of its spirit of social consciousness.

From 1935-1942, WPA artists were recruited through newspaper advertisements placed around the country. In order to qualify, they had to demonstrate financial need and provide a portfolio of their work. The FAP had a non-discrimination clause that meant it attracted and hired artists of color and women, who previously received little attention in the art world. By 1938, the FAP had art programs in all existing 48 states.

The FAP employed artists to paint murals and easel paintings; to create sculptures; and to produce graphic art such as lithographs, prints, and etchings. The FAP paid artists to make 2,500 public murals, 108,000 easel paintings, 19,000 pieces of sculpture, and 36,000 posters. The college’s only FAP murals are in the Library’s LaGuardia Reading Room. The Mural Division was headed by Burgoyne Diller who later taught in the Brooklyn College Art Department.

Partisan politics resulted in opposition to the FAP. Some politicians accused artists of being Socialists and Communists. In 1937, the WPA was saddled with a regulation that it would not allow employment of non-U.S. citizens. Mark Rothko, from Latvia (who later taught at Brooklyn College), and the Dutch artist Willem de Kooning, were among the many artists who were excluded from the FAP because of this ruling.

Paintings of the FAP 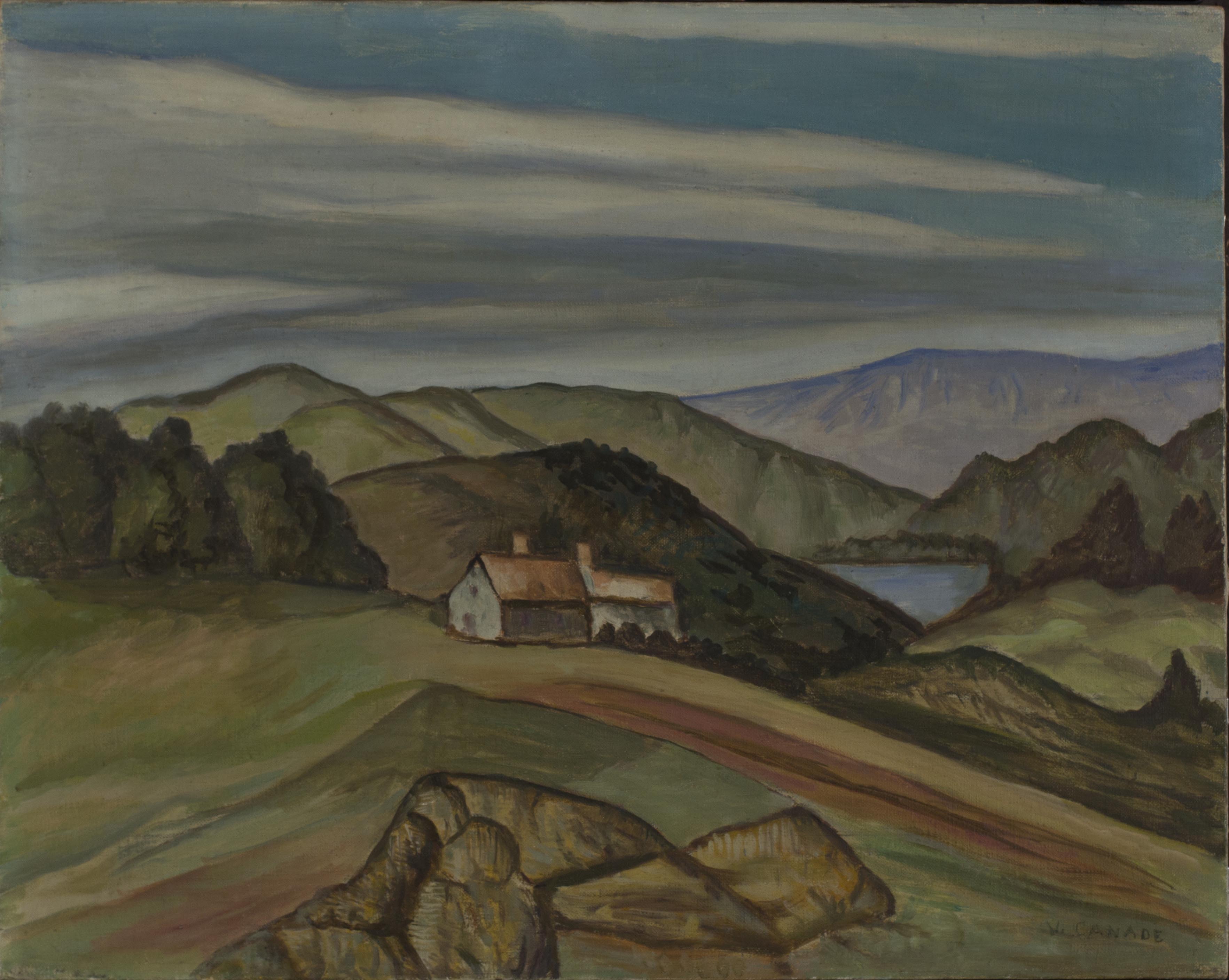 Vincent Canadé was born in San Giorgio Albanese, Italy, and is mainly known for his landscape paintings. He was active during the 1920s and 30s.

In this painting, a Federal Art Project commission, Canadé depicts two lonely houses. They are calmly situated under a cloud-streaked sky, surrounded by fields, trees, boulders, and a lake. The image exudes a sense of tranquility with its muted blues, greens, and browns. The gentle, undulating movement encircling the houses provides this painting with its aptly descriptive title: hills. 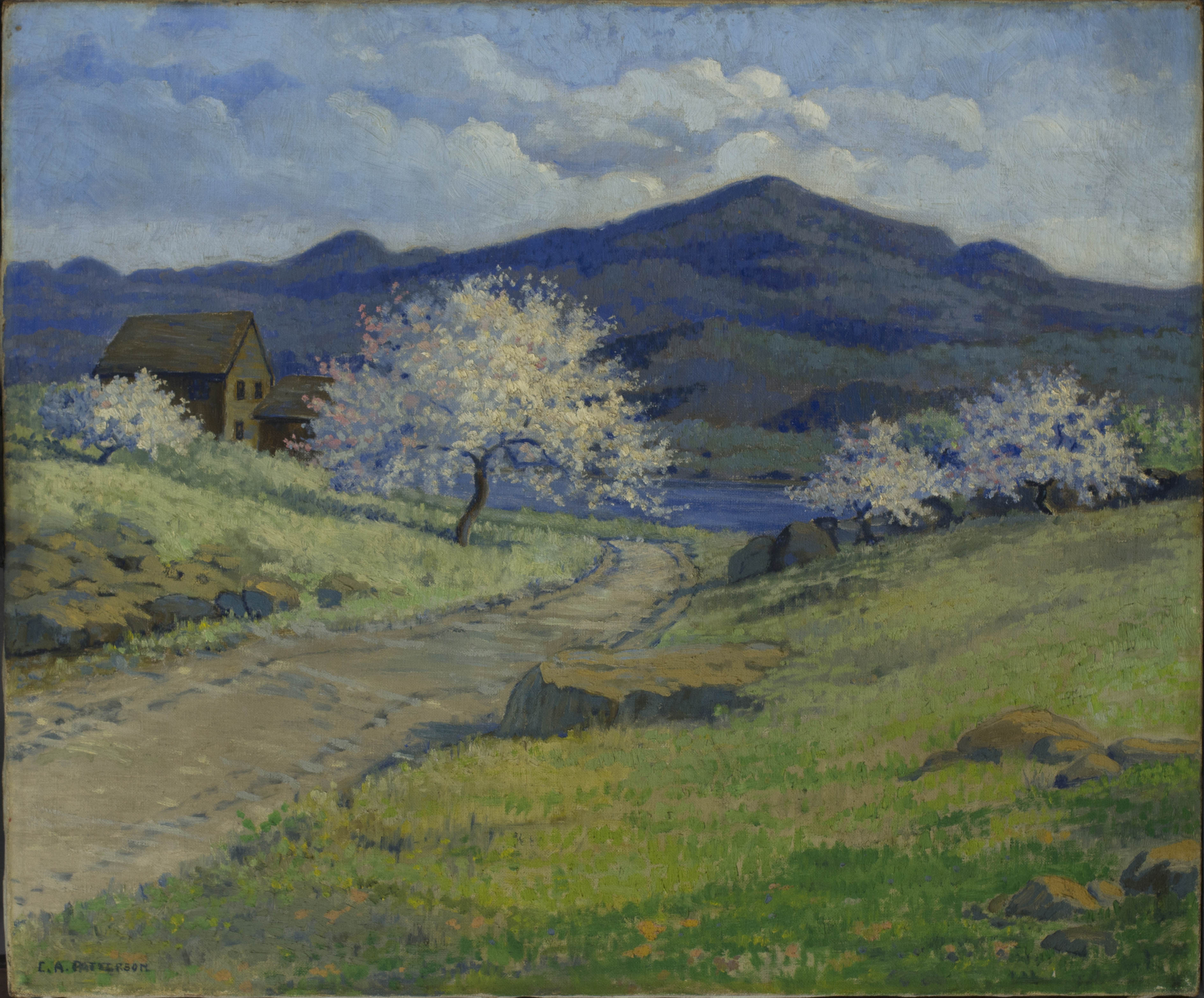 Claude Patterson, A Day in June

Although an artist from the American Midwest, one can see the influence of Impressionism in this work by Claude Patterson. It shares affinities with Camille Pissarro’s painting of 1872, Orchard in Bloom, Louveciennes, evident in the gentle way Patterson depicts his blossoming tree.

Patterson’s palette of blues and greens, his rendering of depth, and his inclusion of buildings also call to mind the works of Paul Cézanne. Like Cézanne’s paintings of Mont Sainte-Victoire, the background of Patterson’s landscape is dominated by the grandeur of a distant mountain. 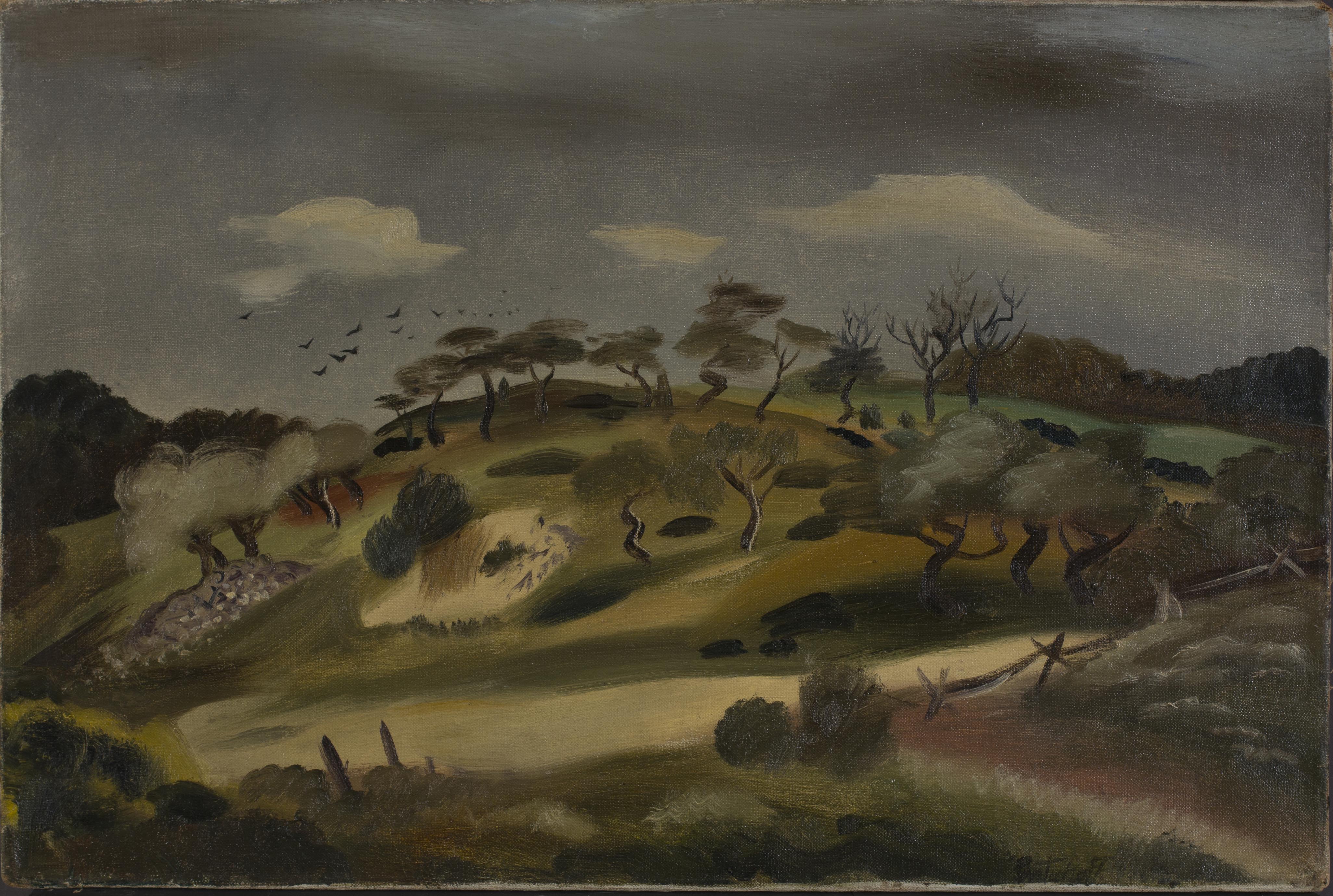 After immigrating to New York, the Russian born Pantuhoff lived in Greenwich Village where he came into contact with the emerging Abstract Expressionists. Pantuhoff, however, followed a different path. Although he first painted portraits of distinguished individuals such as Princess Grace of Monaco and Laurence S. Rockefeller, he eventually became best known for his big-eye portraits in the 1960s.

In this eerie landscape, Pantuhoff uses abstract forms to create the swirling patterns of an uneven hillside. The uncanny, delicate trees evoke movement and emotion. 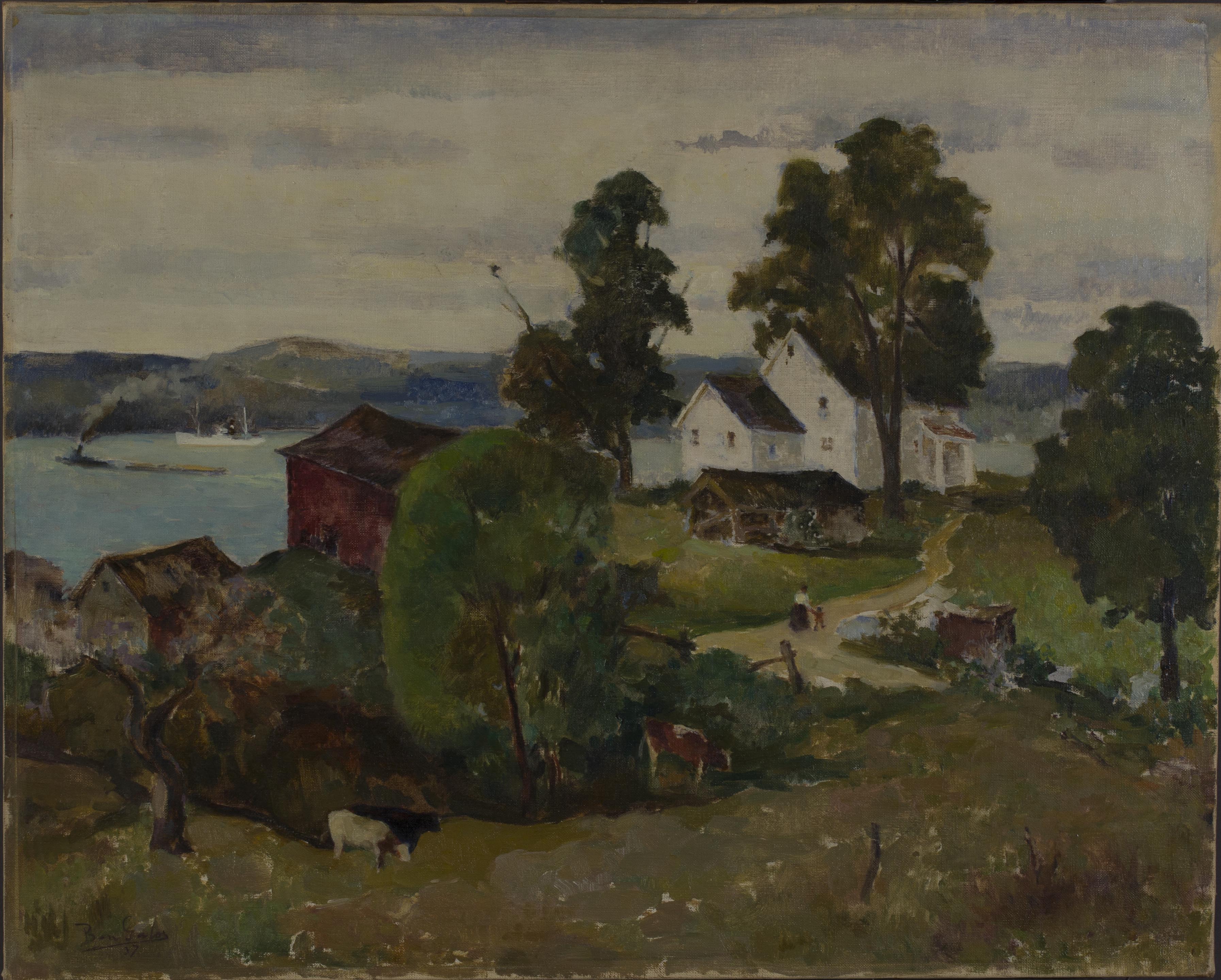 Ben Galos was born Berel Goloschin in Vitebsk, Belarus, and immigrated to New York with his family at the age of nineteen. He studied at the National Academy of Design and although he exhibited his work widely in New York, he appears to have remained poor and single his entire life. Best known for his cityscapes, Galos’s work also includes portraits and landscapes. Galos painted this pristine farmhouse while in the employ of the WPA.

Besides Brooklyn College, Galos’s paintings are also in the Smithsonian Institute and the New York Historical Society. 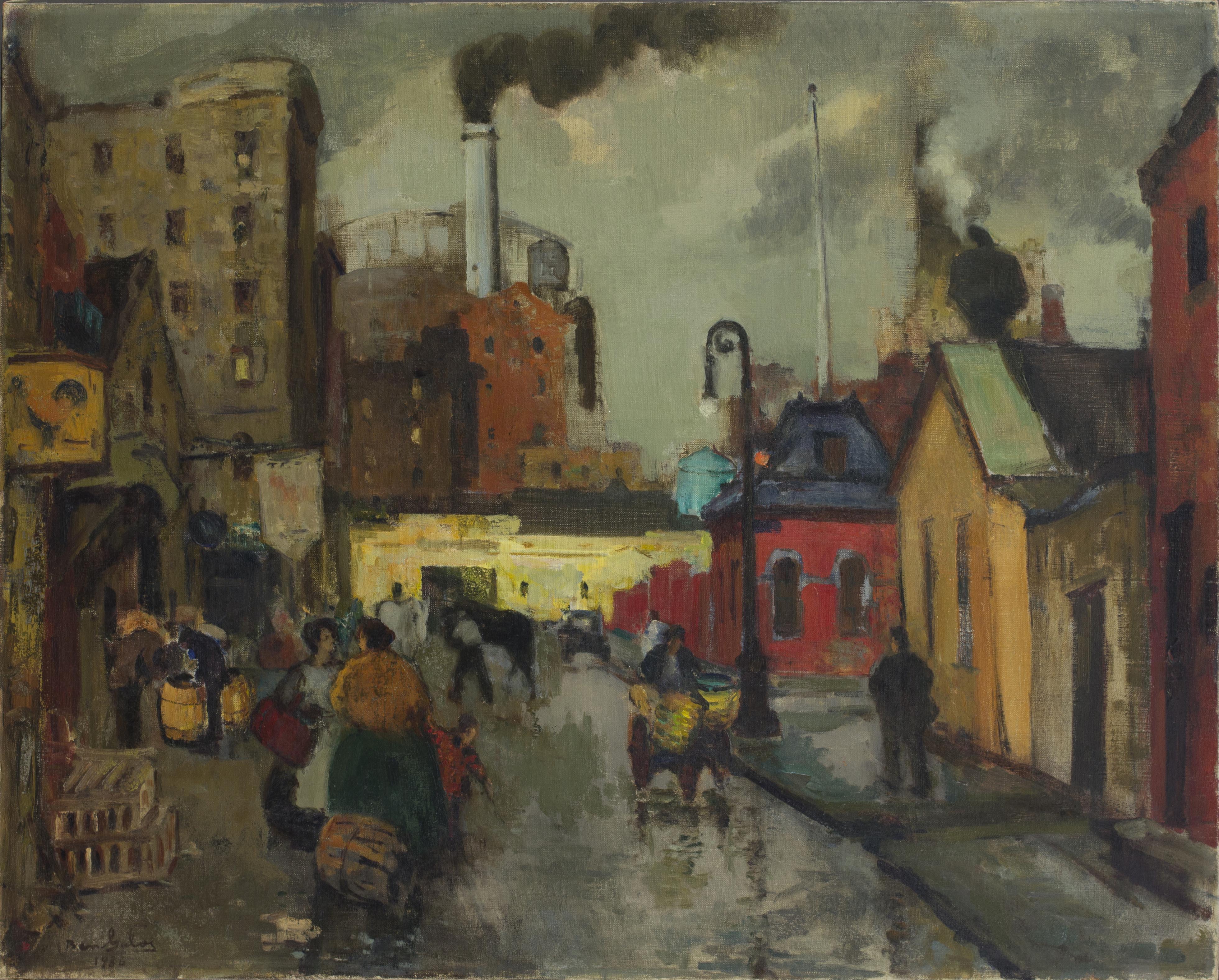 Ben Galos emigrated from Belarus to the U.S. in 1913. Galos’s bustling industrial environment is reminiscent of the Ashcan School. The influence of the American Realists of the early 1900s such as Robert Henri and George Sloan is apparent in this painting, down to Galos’s inclusion of the distinctive New York streetlamp.

During the Great Depression Galos worked for the WPA. Two of his paintings from that era are on view here: this one, and a very different one entitled Old Farmhouse. 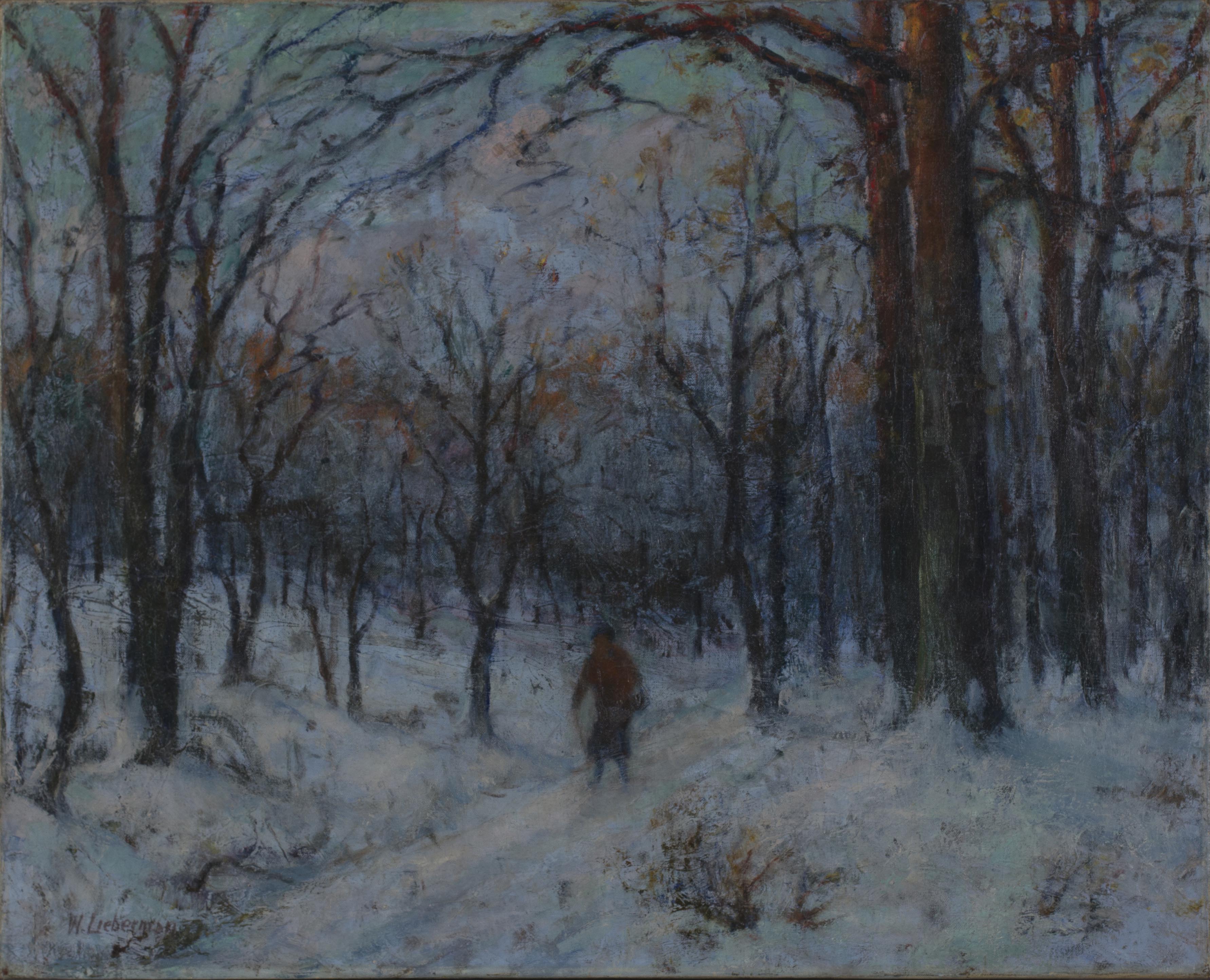 A woman with a basket and cane makes her way down a snow-packed path. The landscape is filled with barren trees, silhouetted against a pastel sky. Pink, blue, mauve, and gold --the colors of a winter’s twilight-- are reflected on the snow-covered ground. 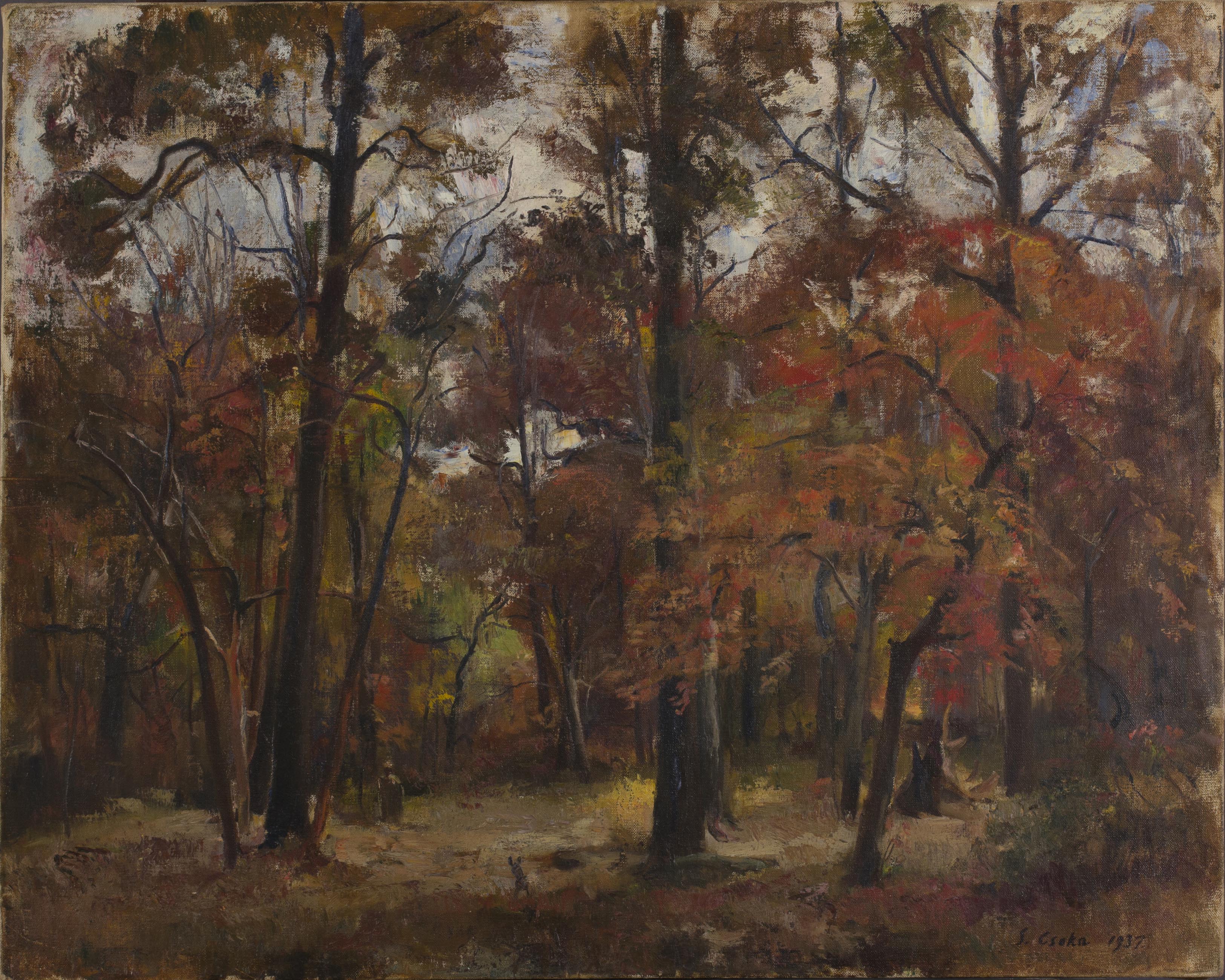 Before arriving in the U.S. during the Great Depression, Stephan Csoka was considered one of Hungary’s most talented young artists. In America he worked as a housepainter with his father-in-law before becoming an art teacher at both Hunter College and the National Academy of Design. His works can be found in institutions such as the Brooklyn Museum and the Library of Congress.

In this painting, created for the WPA in 1937, Csoka creates a scene of rich autumn foliage with a muted palette of orange, brown, green, and purple. 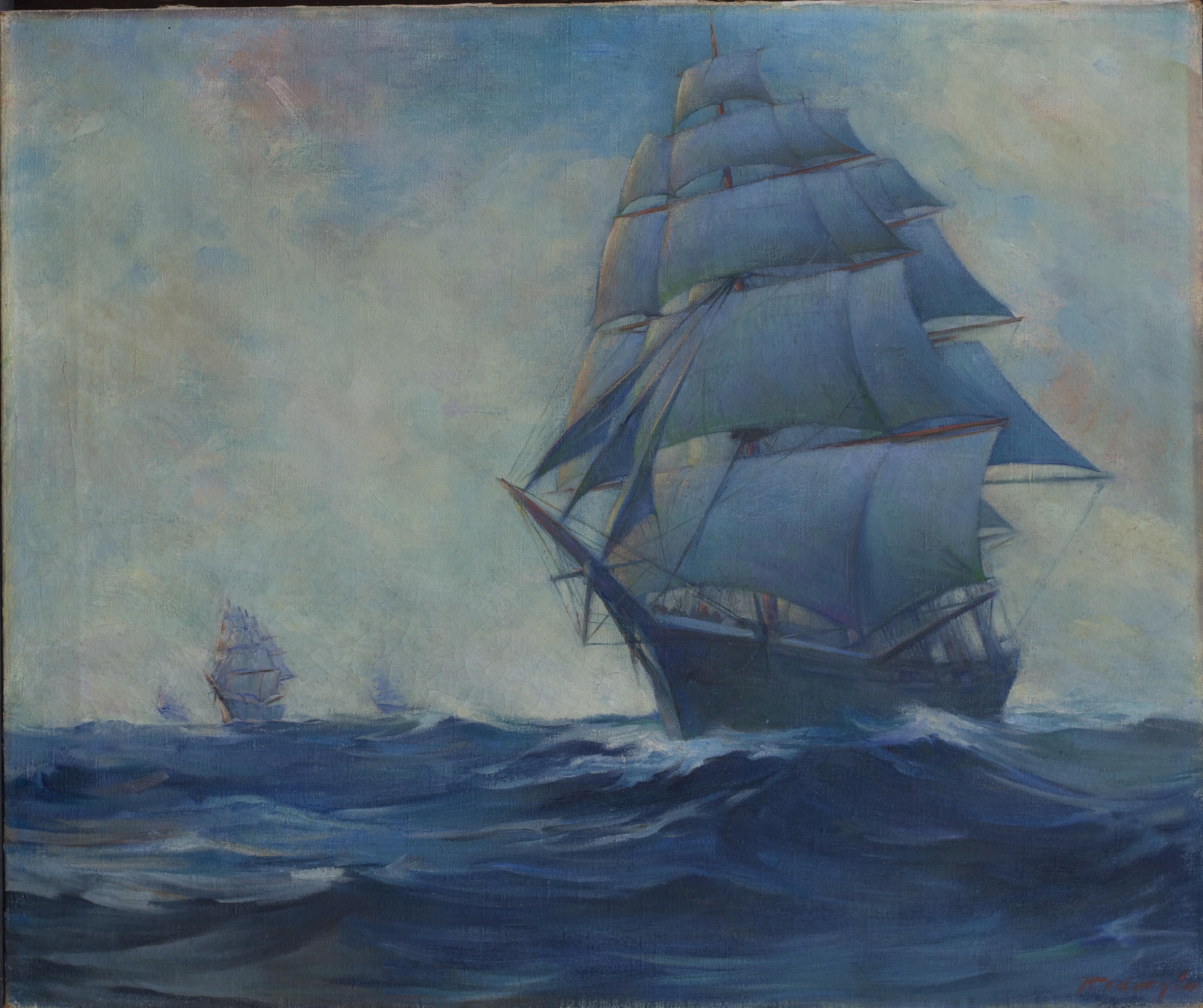 This moody painting of a fully rigged ship at sea was likely inspired by the waterways surrounding New York City during the mid 19th century.

These types of ships were known for their cargo capacity and speed. 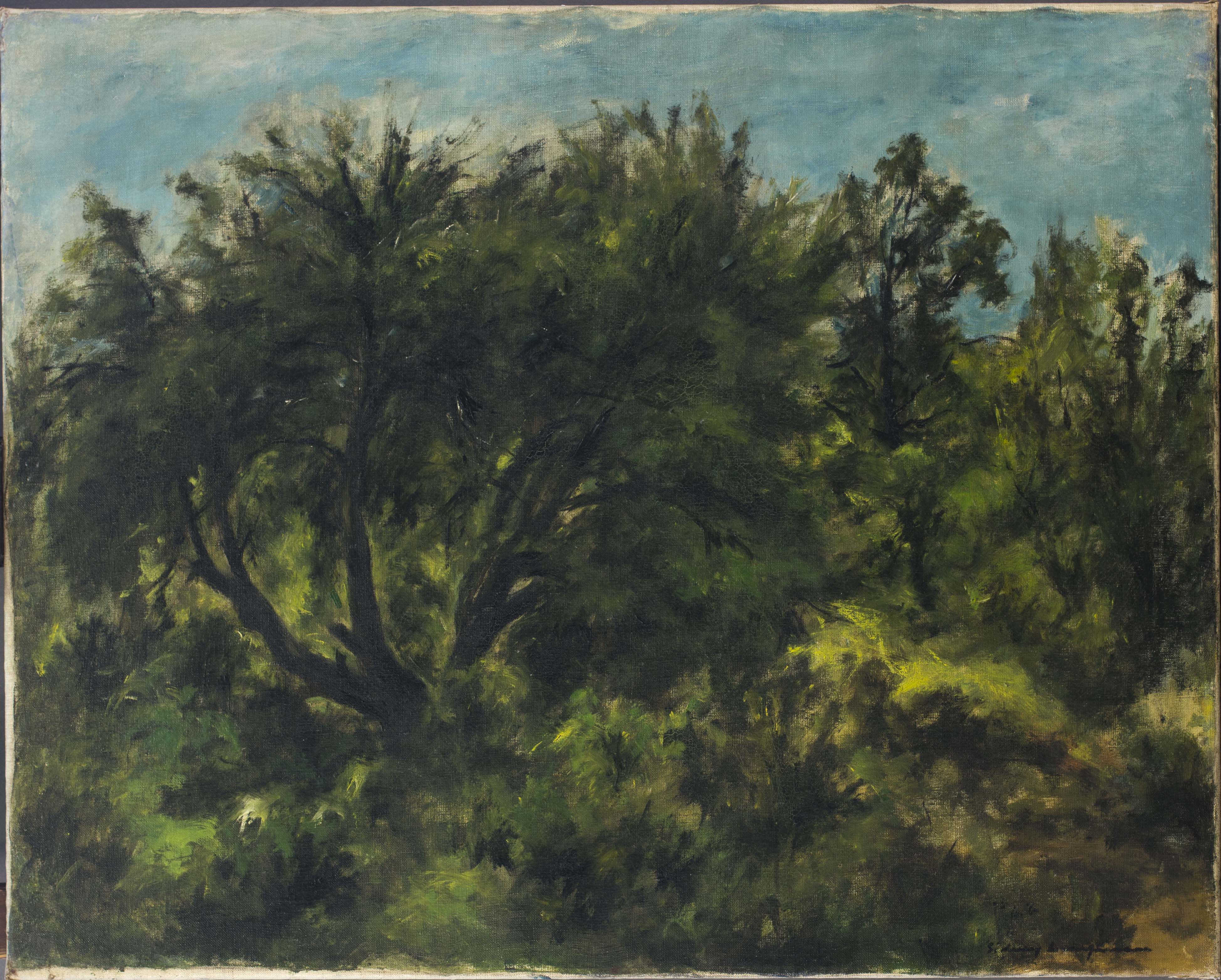 Born in Cleveland, Ohio, Laufman studied at the Art Institute of Chicago and at the Art Student’s League in New York. Robert Henri was his most important teacher. From 1920 to 1933, Laufman lived in Paris where he was friendly with Henri Matisse and in contact with other artists of the Modernist movement.

Laufman painted in both traditional and modern styles and consequently his work is extremely varied. Primarily a painter of landscapes, trees were among his favorite subjects, as can be seen in this lush portrayal of an apple tree in late summer.