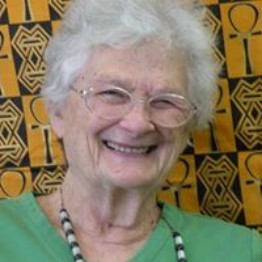 Dr. Gwendolyn Midlo Hall is a historian whose work has largely focused on the historical connections between Louisiana, the Caribbean, and Latin America. She has taught at the University of New Orleans and Rutgers University, and been recognized by numerous professional awards. She is a prolific writer of articles and books, most of whose subjects deal with African-American and Afro-Creole Culture.

Dr. Hall authored the published books Social Control in Slave Plantation Societies: A Comparison of St. Domingue and Cuba (1971), Africans in Colonial Louisiana: The Development of Afro-Creole Culture in the Eighteenth Century (1992, which won various prizes from American Studies, Southern History, and other Minority History associations), Slavery & African Ethnicities in the Americas: Restoring the Links (2005), as well as edited the book Love, War, and the 96th Engineers (Colored): The World War II New Guinea Diaries of Captain Hyman Samuelson (1995). She has appeared in various public broadcasts across the world, and published the "Database for the Study of Afro-Louisiana History and Genealogy" on CD-ROM. Her "Afro-Louisiana History and Genealogy 1719-1820" is now an online database.

Dr. Hall is a Professor Emerita of History, Rutgers University, where she taught Latin American and Caribbean History, as well as a former consulting Research Professor at University of New Orleans.