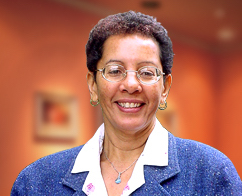 Juanita Díaz-Cotto was born in Puerto Rico and raised between Puerto Rico and New York City. Active in human rights struggles for over thirty years - including those of women, lesbians and gays, prisoners, and people of color inside and outside the U.S. - she considers herself very much both an activist and an academic. Dr. Díaz-Cotto is author of: CHICANA LIVES AND CRIMINAL JUSTICE: Voices from El Barrio (2006) (winner of an International Latino Book Award and a ForeWordMagazine Book Award); GENDER, ETHNICITY, AND THE STATE: Latina and Latino Prison Politics(1996); and the editor, under the pseudonym of Juanita Ramos, of COMPAÑERAS: Latina Lesbians (An Anthology)/Lesbianas latinoamericanas (3rd ed., 2004) and SINISTER WISDOM 74: Latina Lesbians (2008). Dr. Díaz-Cotto is a Professor of sociology, women's studies, and Latin American and Caribbean Studies at the State University of New York at Binghamton. She has given lectures and presentations in Argentina, Barbados, Brazil, Canada, Chile, Costa Rica, Cuba, Dominican Republic, Honduras, Ireland, Italy, México, Peru, Puerto Rico, Spain, South Africa, and over 40 cities in the United States. Her lectures and presentations have covered a wide range of issues including: criminal justice/prisons; Latinas/os and women of color in the U.S.; Latin American feminisms; race and ethnicity; gender, sexuality, and heterosexism; class and income inequalities; oral history and ethnographic research; and community organizing.